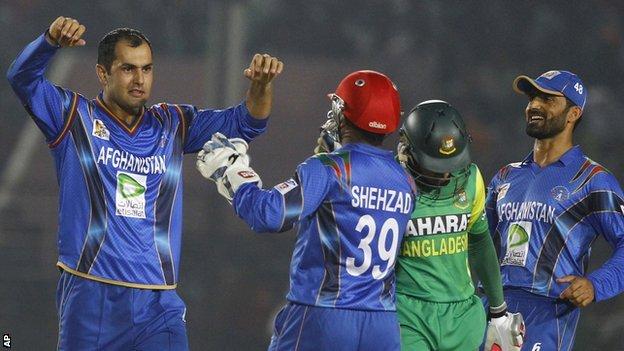 Afghanistan recorded a historic victory as they beat hosts Bangladesh by 32 runs at the Asia Cup in Fatullah.

It was Afghanistan's first win against a Test-playing nation since the national team was formed in 2001.

Bangladesh's last two wickets added a spirited 57 to earn them a bonus point, with Ziaur Rahman hitting three sixes in his 41 from 22 balls.

But Rahman and Rubel Hossain both fell to the off-spin of Afghan captain Mohammad Nabi (3-44) as they were bowled out with 13 balls of the one-day international to spare.

"Fans and the whole country must be celebrating and we will do our best in the remaining matches," said Nabi.

"It was a good partnership between Stanikzai and Shenwari that lifted us and despite missing some chances in the field we bowled well to achieve this landmark win."

Bangladesh captain Mushfiqur Rahim conceded: "We were outplayed in all three departments."

Afghanistan joined the International Cricket Council as an affiliate member in 2001, after many of the original players had learned the game in refugee camps over the border in Pakistan.

Unable to play at home in war-torn Afghanistan but competing in ICC tournaments around the world, the team's progress was charted in an award-winning documentary, "Out of the Ashes", which was shown on BBC Four's Storyville.

They narrowly failed to qualify for the 2011 World Cup but were granted one-day international status for four years.

Although Afghanistan gained ICC associate status in 2013, and have regularly tasted victory against the other top associate teams such as Kenya, Canada, Scotland and the Netherlands, they had never before beaten a full member in eight attempts (three ODIs and five T20 internationals), despite giving India a scare in 2012.

And after the recent changes to the ICC's governance gave hope to the likes of Ireland that top associate nations could play Test cricket in the future - possibly at the expense of lower-ranked full members such as Bangladesh and Zimbabwe - this victory will give Afghanistan hope of an even brighter future.