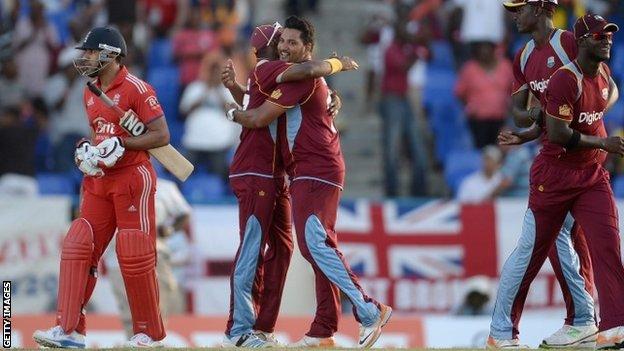 Michael Lumb scored a superb century on his one-day international debut but failed to prevent England from losing their opening match against West Indies by 15 runs.

Openers Lumb and Moeen Ali, also on his debut, put on 96 for the first wicket after the tourists were set 270 to win.

But following the dismissals of Moeen (44) and Lumb (106), England lost wickets cheaply and finished on 254-6.

The next game in the three-match series is on Sunday, again in Antigua.

In that second ODI, stand-in captain Stuart Broad and limited-overs coach Ashley Giles will be hoping their new-look side avoids another capitulation.

Giles, according to ECB chairman Giles Clarke, is a "strong candidate" to succeed Andy Flower as the man in charge of all formats, and will be keen to ensure an improvement on Sunday.

"There will be an overriding sense of frustration in the England dressing-room. They will know they should have won that game. You have to feel for Michael Lumb - he should have walked away with the man of the match award for a century on his debut. But you have to take your hat off to the West Indies for the way they fought back in the game. England started off magnificently well then just fell away."

His team selection will be closely monitored and whether he tinkers with the XI remains to be seen. On Friday, some of his picks underperformed, but there were others who took their chances.

One of those was 34-year-old Nottinghamshire left-hander Lumb, who produced a near-perfect performance as an ODI opener; steady, while keeping the scoring rate moving along during the early stages.

On a momentous day for the Johannesburg-born player, his innings of 106 from 116 balls was the highest by an England one-day debutant and the seventh highest of all time.

He and fellow debutant Moeen, 26, also produced the highest opening ODI partnership by debutants, surpassing the previous record of 71 held by Piet Rinke and Terry Duffin for Zimbabwe against Kenya in 2006.

The pair had never played together before but showed the understanding of a veteran partnership. They reached 53 in 10 overs with little trouble, bar one delivery that struck Lumb in the groin area.

Worcestershire's Moeen was languid but calculating in his stroke-making, although a miscalculation led to his dismissal in the 20th over when he found Sunil Narine at long-on. 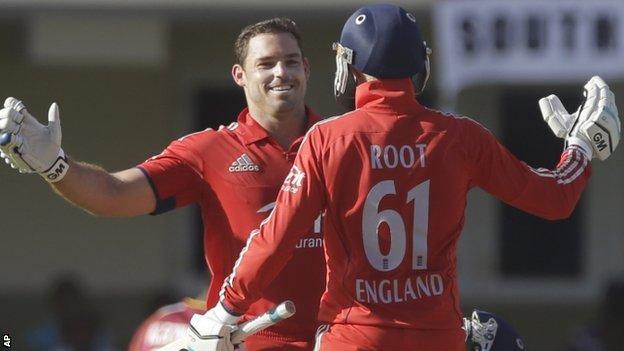 ODI and T20 veteran Luke Wright was in next but never looked at ease during nine balls which brought just one run, before Yorkshire's Joe Root, who scored a century in the pre-series warm-up match, appeared to settle the tourists' nerves with a calm knock.

Lumb survived the nervous nineties to raise his bat for a brilliant maiden ODI ton following a single off Darren Sammy. Eight balls later he was out, after trying to drive Narine over cover, and that precipitated England's collapse.

The score moved from 180-3 to 192-4 when Durham's Ben Stokes saw his leg stump clipped by Narine. Root (37) continued to offer a steadying influence until he too was out when he nicked off-spinner Narine to keeper Denesh Ramdin.

Even after Jos Buttler skied Dwayne Bravo to Jason Holder at extra cover for 12, England still had a good chance to win the match with Ravi Bopara and Tim Bresnan at the crease. However, the pair failed to find much-needed boundaries as England's innings ended meekly - the visitors scoring just 30 runs in the final five overs.

This was all in sharp contrast to the West Indies innings. The home side were reduced to 45-4 after 16 overs, more as a result of poor judgement rather than spectacular bowling.

However, their innings was saved by 108-run partnership between the patient Lendl Simmons (65) and the more cavalier Dwayne Bravo, who was later joined by the explosive Darren Sammy (61 from 52 balls) as the West Indies finished strongly, a late burst which ultimately proved the difference between the two sides.