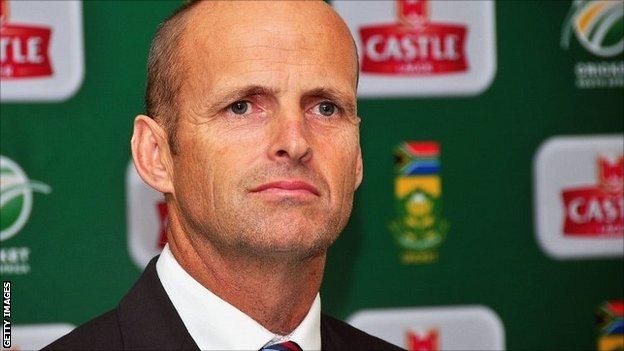 World Cup-winning coach Gary Kirsten says he would consider the England job - but only in 10 years' time.

The ex-India and South Africa boss, 46, recently ruled himself out of the vacant England role for family reasons.

Kirsten had been identified by many as the ideal man to succeed Andy Flower, who left following the Ashes whitewash.

"Any position of this nature that requires a lot of travelling might be a consideration later in life," Kirsten told BBC Radio 5 live's Sportsweek.

"I've got really young kids so we are talking 10 years from now, and I'm sure in 10 years people would have forgotten about me!"

With ex-England spinner and current limited-overs coach Ashley Giles favourite to replace Flower, Kirsten also confirmed he had received no approach from the England and Wales Cricket Board.

But he added: "I would regard any position of that nature as a privilege.

"I'm not really at a time in my life where I could accept it because of the nature of my family situation. I need to spend some time at home."

An opening batsman, Kirsten played 101 Tests and 185 one-day internationals for his native South Africa in a decade-long international career.

Then, as a coach, he took both India and the Proteas to the top of the International Cricket Council's Test rankings, as well as winning the 2011 World Cup with India.

He announced in May 2013 that he would step down as South Africa coach at the end of his contract three months later.

Kirsten is about to coach the Delhi Daredevils franchise - whose squad includes discarded England batsman Kevin Pietersen - in this year's Indian Premier League.

He had received the backing of ex-England captain Michael Vaughan, amongst others, as a potential England coach when Flower resigned as England team director following their 5-0 series defeat by Australia.