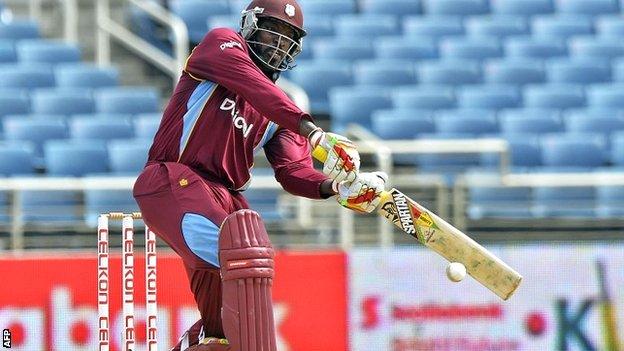 West Indies opener Chris Gayle will miss the three-match one-day international series with England because of stiffness in his lower back.

"He had precautionary scans and will have medical management and treatment in Jamaica," a Windies statement read.

The first of three ODIs in Antigua is on 28 February, followed by three Twenty20 internationals next month.

Gayle will hope to prove his fitness for the ICC World Twenty20, which begins in Bangladesh on 16 March.

Stuart Broad, who will captain England on their Caribbean tour, said: "We know what Chris Gayle offers. He can win a game on his own.

"I'm sure the West Indies will be desperate to get him fit for the World Twenty20. I'm sure they won't risk him too much in the next few weeks.

"As an England side, you want to test yourself against the best players in the world, and Chris Gayle is one of those."

The Windies are currently involved in a limited-overs series against Ireland, with the two sides meeting in a one-off ODI in Jamaica on Sunday after the Twenty20 series was drawn 1-1.