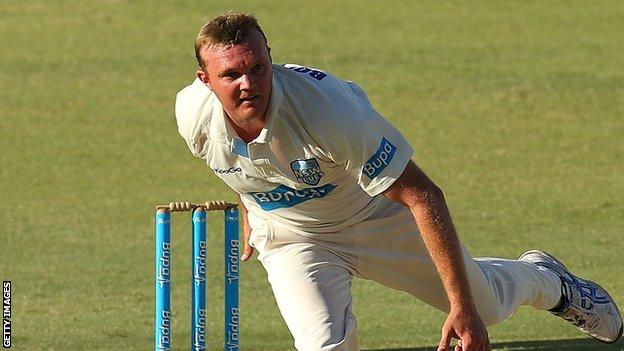 Kent have signed Australia fast bowler Doug Bollinger as their overseas player for the 2014 campaign.

The 32-year-old has taken 50 wickets at an average of 25.92 in 12 Test appearances and has played 39 one-day internationals and two Twenty20s.

Bollinger, a left-am seamer, last made a Test appearance in December 2010, a defeat by England in Adelaide.

He has taken 21 wickets an an average of 26.80 for New South Wales in this season's Sheffield Shield.

I feel I am bowling as well as I ever have, and look forward to being able to contribute both on and off the field

Bollinger had a spell in English domestic cricket with Worcestershire in 2007, when his 16 County Championship wickets came at 44.56 apiece.

He will be eligible for all forms of cricket during his time at Canterbury.

"I am very excited about the opportunity to play with Kent," Bollinger said.

"I feel I am bowling as well as I ever have, and look forward to being able to contribute both on and off the field.

"I have had quite a few chats with [Kent coach] Jimmy Adams and can't wait to get over there and rip in."

He said: "Doug is bringing a wealth of experience, having performed successfully at all levels and across all formats. We are confident he will make a positive contribution to Kent in the season ahead."

Northants were unable to re-sign another Australian seamer, Trent Copeland, for this season because he did not meet visa criteria, having not played a Test in the last two years.

Although Bollinger last played a Test more than two years ago, he is eligible for a playing visa on the basis that he has played five Tests in the last five years.