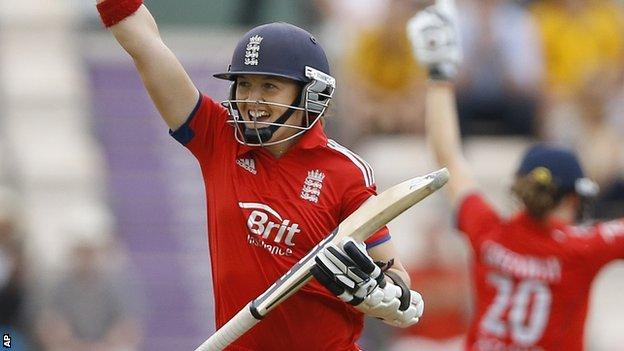 The 32-year-old, who is a teacher, made her England debut in 1999 and played in 11 Tests, 88 one-day internationals and 35 Twenty20 internationals.

Brindle featured in three Ashes-winning sides and in 2011 became the first woman in England to score a century in men's Premier League cricket.

"I will forever cherish the highs and lows of playing for England," she said.

"Nothing will ever match the feeling of pulling on my England shirt, but the time feels right to move on with my career at Greenwich House School and to spend more time at home with my family.

"Having taken part in five Ashes series, I feel incredibly proud to walk away having won three, with the last two being contested over the innovative multi-format arrangement.

"The most recent win in Australia has to be the biggest highlight, in particular, the immense team effort to win the Test in Perth."

Brindle's England career began nearly 15 years ago under her maiden name Arran Thompson, and in 2002 she shared a then women's Test record opening partnership of 200 with Caroline Atkins against India at Lucknow.

After scoring a century to help win the Women's Ashes in 2005, she took a break from cricket to start a family.

Returning to England duty in 2011 as the only mother in the side, she was often accompanied on tour by her husband James and young son Harry.

Brindle's historic century came when she made 128 for her home town club Louth against Market Deeping in the Lincolnshire Premier League.

"My return to international cricket in 2011 involved my family being allowed to travel with me. This was a first for the England women's team and is something for which I cannot thank the ECB, my team-mates and the coaching staff enough," she said.

"Representing your country is the ultimate prize, but being able to share it so closely with my husband and son has been incredible."

England & Wales Cricket Board head of women's cricket Clare Connor, who captained Brindle in the early part of her international career, added: "Arran will be sorely missed.

"A true professional, an awesome athlete, a brave batsman, a dynamic fielder and a genuine team player in every sense, Arran has given her all to the England team.

"This has been an agonising decision for Arran, but it is wholly respected as she embarks on the next stage of her teaching career. We wish her every success and happiness and thank her for her commitment and passion."

England's women are next in action at the Women's World Twenty20 in Bangladesh next month.