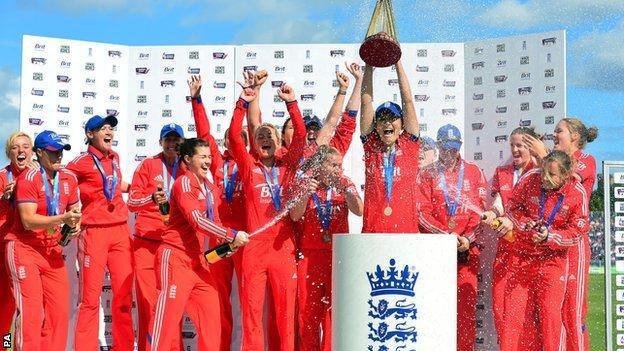 England are to have their first full-time professional women's cricket team following major investment by the game's governing body.

The England and Wales Cricket Board (ECB) has announced "significant" pay rises for the top players.

Captain Charlotte Edwards took to Twitter to react to the news, writing: "Today is a day I never thought I'd see in my time as a player!"

Former captain Clare Connor, who is now head of women's cricket, told BBC Sport: "Charlotte Edwards and I had to pay for our first England blazer to go on tour to India in 1995 and now 18 years on, what a fantastic day this is for the sport.

"I am incredibly proud of the backing the ECB give the women's game and it is a monumental day for our sport.

"Not a lot will change in how we offer contracts but the huge difference is the amount of money we're talking about.

"Players coming trough our pathway now have the opportunity to aim to play professional sport and for any woman that's an incredible dream."

ECB chairman Giles Clarke called the team's success in the Ashes "a real bright spot" and said he hoped they would "become some of the best-paid sportswomen" in the country.

"These pay rises are significant and, as a result, we are proudly creating the first group of full-time women's professional cricketers," he said.

Increases to pay and investment will be funded by revenues from International Cricket Council events held in England.

The game's governing body has also committed to reviving inner-city cricket over the next 10 years and hopes to attract thousands of new players.

The "Eureka" study, conducted by the ECB and involving almost a million participants, shows that people in inner cities struggle to get access to grass pitches.

The 'Eureka' survey in numbers

1.7m people have played cricket in the last 12 months

375,000 people were involved in cricket matches in a single week last June

30% of cricketers are from an ethnic minority

31 is the average age of amateur players

93% of cricket players are male

A new London-based pilot scheme run by the ECB will build and renovate cricket grounds.

Minister for Sport Helen Grant welcomed the "significant financial commitment" into both the women's game and inner-city facilities.

She added: "Sport generally, and cricket specifically, appeals to people right across the country and it is excellent news that the ECB are acting to improve access and revive interest in cricket in our urban centres."

Shadow Minister for Sport Clive Efford said: "Cricket is showing the way to other sport governing bodies with their investment and by creating a professional team of elite women cricketers they will inspire a new generation young women to play in the future."

Clarke, meanwhile, praised the England women for their involvement in the "Chance to Shine" scheme, which encourages children at state schools to take up cricket.