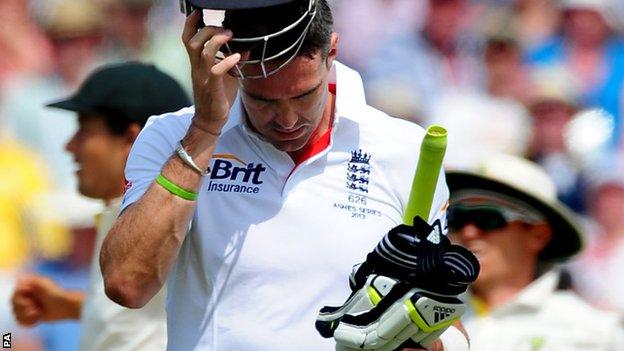 Kevin Pietersen's England career is over after he was told he is no longer part of the national team's plans.

The 33-year-old batsman, England's all-time leading run-scorer across all formats, was given the news by the England and Wales Cricket Board (ECB).

ECB managing director Paul Downton said: "The time is right to rebuild not only the team but also the team ethic."

"If England have failed in their attempts to manage him, then so has everyone else."

Pietersen responded: "I will continue to play but deeply regret that it won't be for England."

"Playing cricket for my country has been an honour," said South Africa-born Pietersen, who made his England debut in 2004.

"Every time I pulled on the England shirt was a moment of huge pride for me and that is something that will live with me forever.

"Although I am obviously very sad the incredible journey has come to an end, I'm also hugely proud of what we, as a team, have achieved over the past nine years. I believe I have a great deal still to give as a cricketer."

England were whitewashed 5-0 by Australia in the Ashes Test series and Pietersen, his team's leading run-scorer, was criticised for the manner of some of his dismissals.

He said last month he was "determined to help regain the Ashes" in England in 2015 and was included in a provisional 30-man squad for the World Twenty20 in Bangladesh, starting in March, when limited-overs coach Ashley Giles described him as a "million-pound asset".

But the ECB have now decided he no longer has a future with England and are due to name their squad for the World Twenty20, plus a limited-overs tour of the West Indies that begins later this month, this week.

The ECB said that the England management, which includes Giles, Downton and national selector James Whitaker, agreed "unanimously" that Pietersen would not be part of their plans for those trips or beyond.

Downton, who took over from Hugh Morris on 1 February, added: "Clearly this was a tough decision because Kevin has been such an outstanding player for England, as the fact that he is the country's leading run-scorer in international cricket demonstrates.

"However, everyone was aware that there was a need to begin the long-term planning after the Australia tour. Therefore we have decided the time is right to look to the future."

The ECB's decision, announced via a statement, brings to an end Pietersen's brilliant but controversial career.

He is regarded by many as England's best player - his tally of 23 Test centuries is second only to Test captain Alastair Cook in the all-time list - and only six players have played more Tests for England.

In his debut Test series in 2005, he helped England win the Ashes for the first time in 18 years, one of four Ashes triumphs in his career.

Appointed captain in 2008, he resigned after only five months following what the ECB described as an "irretrievable breakdown" in his relationship with then coach Peter Moores, who was sacked.

"The ECB is appointing a new director of cricket soon. What if he wants KP back in? It's a very strange decision for England to make."

Pietersen was named player of the tournament as England won the World Twenty20 in 2010, their first major limited-overs trophy.

He retired from international limited-overs cricket in May 2012 before reversing his decision two months later.

The Surrey batsman was dropped during the Test series against South Africa that summer for sending "provocative" text messages to opposing players, for which he apologised to then captain Andrew Strauss.

Pietersen was overlooked for England's World Twenty20 defence later that year and was added to the touring party for the winter trip to India only after a successful "integration period".

The Ashes hammering down under was followed by reports of divisions in the England dressing room, but former spinner Graeme Swann, who retired midway through the series, claimed Pietersen's behaviour had been "much improved" since his reintegration.

Shortly before he quit as team director last week, Andy Flower denied issuing the ECB with an ultimatum to choose between him or Pietersen.

Downton said: "England cricket owes a debt of gratitude to Kevin, who has proved to be one of the most talented and exciting players to ever represent the country and his 13,797 runs are a testimony to his immense skill.

"This decision brings some clarity now for the future of the England teams and we all wish Kevin the very best in the rest of his career."