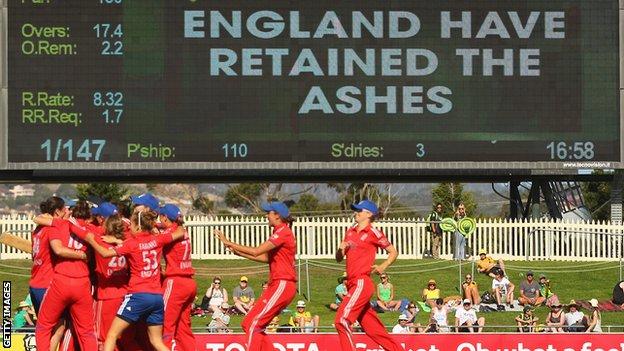 England have retained the Women's Ashes after winning the first Twenty20 international by nine wickets to take an unassailable lead in the series.

Skipper Charlotte Edwards (92 not out) and Sarah Taylor (50 not out) saw them home with an unbeaten stand of 114.

"Charlotte doesn't get sick of scoring runs, does she? England have thoroughly deserved it; they outplayed Australia for the majority of the series. The T20 format brings teams closer together and you can get away with things a little bit more, but today Australia didn't get away with anything.

"They didn't bowl as well as they could and England pounced on any short ball, any wide ball. They also got off to a slow start as England's bowlers were fantastic at the beginning of the innings."

Earlier, Australia skipper Meg Lanning (78 not out) won the toss and added 67 for the fourth wicket with Ellyse Perry (29 not out) as the hosts made 150-3.

In the end, it proved a stroll in the Hobart sunshine for Taylor and Edwards - ranked first and third in the International Cricket Council's T20 rankings - as Australia's bowlers had no answer to the determined second-wicket pair, who rounded off the victory with 13 balls to spare.

The only nervous moment for England came when Taylor survived a close run-out appeal as keeper Alyssa Healy's gloves had disturbed the bails before a direct hit had done so.

Somewhat surprisingly, Australia waited until the 10th over before introducing quick bowler Ellyse Perry, by which time Edwards and Taylor were well set.

The skipper reached her fifty from only 34 balls, launching a Jonassen full toss for a six over cow corner, while Taylor was characteristically prolific all around the wicket, clubbing Farrell from outside off stump for leg-side fours.

And fittingly, it was skipper Edwards, already assured of England's highest women's T20 international score, who crashed the winning boundary through mid-wicket before raising her arms aloft and being engulfed by her team-mates.

After winning the Test and the first one-day international, England had known they would retain the Women's Ashes trophy if they won any of the five remaining limited-overs games.

Defeat in the last two one-dayers still left England with three bites at the cherry in the Twenty20 series, although they were dealt a blow before the start after opener Heather Knight and strike bowler Anya Shrubsole were ruled out with hamstring and hip injuries respectively.

Having lost the toss, Edwards handed Danielle Hazell the new ball and the Durham off-spinner trapped Elyse Villani lbw sweeping in the first over.

"England came into this game 8-4 up after two demoralising one-day international defeats and Charlotte Edwards went into the game with a threadbare bowling attack because of injuries, but she led from the front, blasting the ball to all parts of Hobart.

"It was a real innings of defiance as she grabbed the game by the scruff of the neck. She said it was the best Ashes victory by far in her career, and she's had five of them."

Fellow opener Alex Blackwell was given a life on seven when she was dropped by Amy Jones at mid-on, off the bowling of Jenny Gunn.

But Blackwell perished on 21 when she nudged the ball to Edwards at short fine leg; non-striker Lanning charged through for a single which was never on and Blackwell was run out by nearly half the pitch.

Having added 43 with Blackwell, Lanning found solid support from Jess Cameron (16) and then Perry.

Lanning, again deputising as captain for the injured Jodie Fields, hammered nine fours and launched Gunn - whose four overs cost 40 - for a six over mid-wicket as their unbroken stand left the Southern Stars with a fighting chance of keeping the series alive.

But once Edwards and Taylor established themselves, there was only going to be one winner.