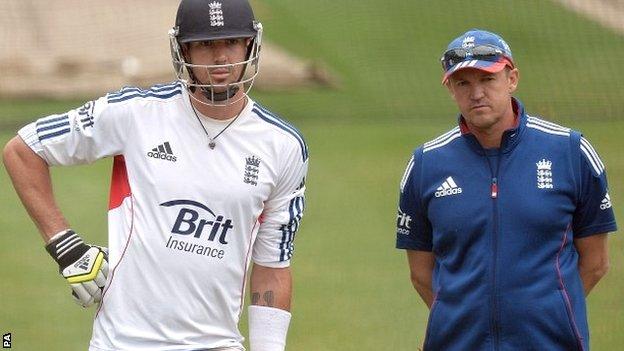 Following the 5-0 Ashes loss in Australia, Flower denied claims that he would leave if Pietersen remained in the England team.

I'm sure what's being reported is nowhere near the truth

"We went through tough times and people want to make up stories," said Saker.

"Kevin has been the same as he has always been. I'm sure what's being reported is nowhere near the truth."

Flower pledged to continue as team director after the Ashes whitewash but doubts remain over the future of Alastair Cook.

He admitted he may step down as one-day skipper after losing the one-day international series in Australia.

A decision to rest Pietersen for the five-match ODI series and three Twenty20 internationals was made in December and he is now back in England, while Flower is not involved with the one-day team and is preparing for the home Test series with Sri Lanka in May.

"The relationship between Kevin Pietersen and Andy Flower hasn't changed from where I'm sitting," Saker added. "That's what happens. When you are losing these things come out quite often."

Meanwhile, Saker, who replaced Ottis Gibson in 2010 and agreed a new contract to 2015 last October, also spoke of his frustration at not being able to improve the fortunes of fast bowler Steven Finn, who left the tour after being deemed "unselectable" because of poor form.

"We've been trying really hard over the whole time he was here," Saker said. "We were getting close at times and at other times we were going backwards. He's a fantastic kid and going forward he's going to be a big part of the future of English cricket."