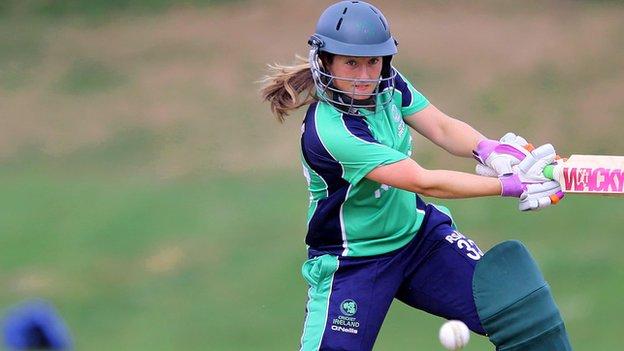 In a match which was part of the current tri-series also involving South Africa, the Irish women held their nerve to secure a six-wicket win.

After restricting Pakistan to 97-4, a 44-run partnership between the Joyce sisters Cecelia and Isobel guided the Irish home with two balls to spare.

It was a first win for new Ireland coach Trent Johnston.

The former Ireland men's captain was appointed to the Irish women's role last month but his first matches in charge last week saw the team going down to heavy one-day defeats against Pakistan and South Africa as the Qatar series got underway.

However, it was a different story in Sunday's Twenty20 contest.

Clare Shillington (15) got Ireland off to a quick start, but her dismissal saw Ireland falter from 33-1 to 35-3.

However, Cecelia Joyce's unbeaten 30 and her twin sister's 28 helped steer the Irish home although Melissa Scott-Hayward hit the winning run.

Player of the match Isobel Joyce (1-12), Louise McCarthy (1-15), and Elena Tice (1-23) were the Irish wicket-takers with Lucy O'Reilly enhancing her reputation as a superb fielder with yet another run-out.

"I can't compliment the girls enough for their attitude and commitment over the past week," said Johnston.

"There's no doubt everyone was pretty low after the defeats in the ODI series.

The victory will boost Irish morale ahead of their challenge at the World Twenty20 in Bangladesh in March and April.

The Irish will continue their Doha campaign on Monday in back-to-back Twenty20 games against South Africa and Pakistan.