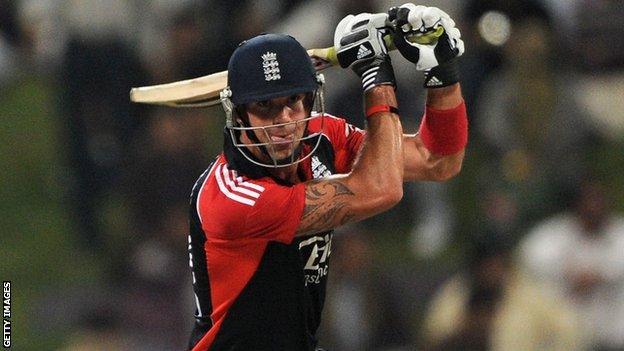 Kevin Pietersen has been named in England's provisional 30-man squad for the ICC World Twenty20.

The batsman's future with the national team has been questioned following the 5-0 Ashes whitewash by Australia.

The 33-year-old is not yet guaranteed a place in the tournament, however, as England will halve their squad to 15 after the Twenty20 series in Australia.

England have named all 15 players who have been picked for the forthcoming three-match series against Australia, while four uncapped players are also included.

Two batsmen, Moeen Ali of Worcestershire and James Vince of Hampshire will hope to receive a surprise call-up for the tournament, along with Nottinghamshire left-arm seamer Harry Gurney and Lancashire short-form specialist spinner Stephen Parry.

Batsmen Gary Ballance, Michael Carberry and James Taylor and bowlers Chris Jordan and Graham Onions, all capped in other formats but not in the shortest form of the game, are also in with a chance of selection.

Pietersen left Australia following England's 5-0 Ashes defeat, having been rested for the one-day and Twenty20 sections of the tour.

When asked whether he and Test coach Andy Flower had discussed overlooking Pietersen, Giles replied: "No."

Pietersen, England's all-time leading scorer in all forms of international cricket, was named player of the tournament when England won the 2010 World Twenty20 in the West Indies.

KP in the IPL

The Twenty20 tournament, which starts in Bangladesh in March, ends with the final on 6 April - two days before the start of the Indian Premier League season.

Pietersen missed last year's IPL through injury but has not been retained by the Delhi Daredevils franchise he played for in 2012.

But he could still feature as he will be a free agent when the auction for this year's competition is held on 12 February.

Have your say on England's provisional squad for the World Twenty20 via the Test Match Special Facebook page.