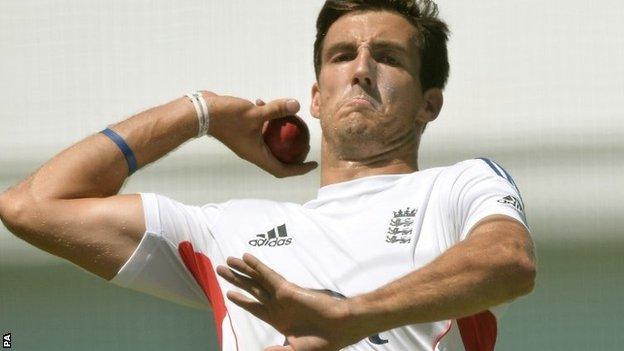 Fast bowler Steven Finn is to return home early from England's tour of Australia to "work on technical aspects of his game".

The Middlesex paceman, 24, was the only member of the 17-man Test squad not to get any playing time during the 5-0 Ashes whitewash.

Sometimes through your career you go through those ups and downs

England one-day coach Ashley Giles said Finn was leaving "for his own good".

He added: "In the short term, he needs a couple of weeks away. Steven is not selectable at the moment."

In the wake of the Ashes Tests, England are one game into their five-match one-day series against Australia, which ends in Adelaide on 26 January.

Despite previously being a regular in the one-day side, 6ft 7in paceman Finn missed England's six-wicket defeat by Australia in Melbourne and the 172-run win over a Prime Minister's XI on Tuesday.

The Middlesex bowler has also taken 90 wickets in 23 Tests but has not played in the longest form of the game since the first match of the home series against Australia at Trent Bridge in July.

He took 11 wickets in his two first-class tour matches down under, but an economy rate of 4.44 contributed to his lack of Test action.

"Mentally, there's no problem but it does wear you down," said Giles of the decision to send Finn home early. "Sometimes through your career you go through those ups and downs.

"His timing is out. That then can affect your confidence and certainly it is not coming out as quickly as he would like.

"I suppose he has been in this state for at least a couple of months and it hasn't worked. We feel now it is best to take him out of it. Sometimes you do have to do that."

Of all bowlers to have sent down a minimum of 2,000 deliveries for England in Tests since 1959, Finn's strike-rate of 48.3 is bettered only by Simon Jones, who was a key member of the side which won the Ashes in 2005.

Giles added: "Steven is one of our most talented bowling assets who has played and will continue to play an important role for England.

"He has been working hard over the last couple of months on technical aspects of his bowling and Steven and the coaches all feel continuing this work out of the performance environment will be beneficial for him."