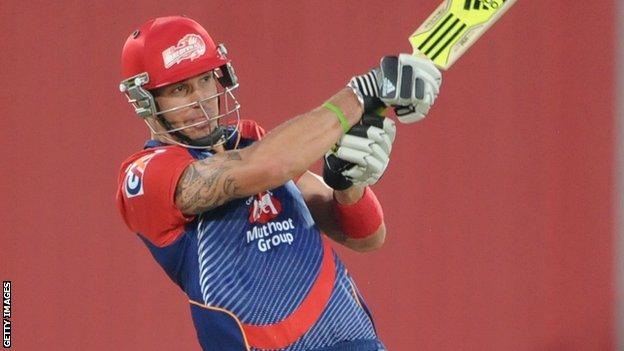 England batsman Kevin Pietersen was among those released as Indian Premier League franchise Delhi Daredevils decided not to retain any players.

It means the 33-year-old will be a free agent when the auction for this year's competition is held on 12 February.

Among others leaving Delhi are Australia David Warner and India's Virender Sehwag.

In that time he has scored 634 runs in 21 matches at an average of 42.26 with a highest score of 103 not out, however he missed last season's competition because of injury.

In a statement, Delhi Daredevils said: "We are grateful to all our players and support staff and most importantly our fans who have been a part of DD in the last six years.

"It was a unanimous decision by the management in order to build a fresh team that our fans will be proud of."

Former England captain Michael Vaughan stated this week that he believes there is an issue between Pietersen and England team director Andy Flower.

Flower has denied issuing an ultimatum that he was prepared to quit if Pietersen remained part of the set-up following a humiliating Ashes tour which saw England beaten 5-0.

And the South African-born player, who helped England win the World Twenty20 in 2010, has reiterated his commitment to the national side - claiming he wants to help them retain the Ashes in 2015.

Should the Surrey player earn another IPL contract it is likely rule him out of the early round of County Championship matches in England.

This year's IPL tournament runs from 8 April to 30 May and the agreed cut-off date for IPL players to return is 13 May, which would give them seven days to prepare in home conditions for the one-day international series against Sri Lanka - although Pietersen has only played nine one-day internationals since February 2012.

This summer England take on Sri Lanka in a two-Test series and India over five Tests. The first Test against Sri Lanka starts on 12 June.