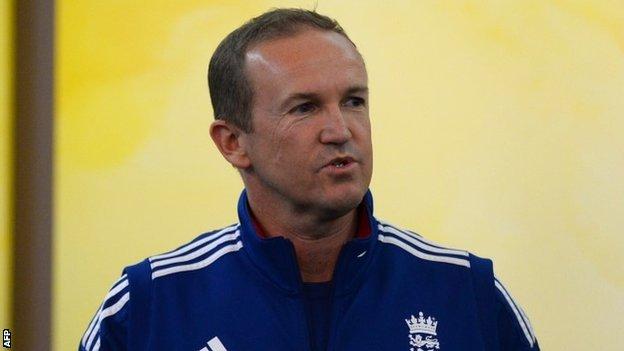 Coach Andy Flower has denied issuing an ultimatum that would result in either him or batsman Kevin Pietersen quitting the England team.

Several newspapers reported Flower was prepared to resign if Pietersen remained part of the set-up following a humiliating Ashes tour.

But Flower said: "The reports I have issued an ultimatum of some description to the ECB are totally inaccurate."

Pietersen tweeted he was "shocked and saddened" by the reports.

The 33-year-old added: "I wish to repeat my strong desire to continue playing for my country and to help us regain the Ashes in 2015."

England rose to number one in the world Test rankings in August 2011 and completed their third consecutive Ashes series victory with a 3-0 home win over Australia in the summer of 2013.

But the tourists surrendered the Ashes last month and were eventually beaten in all five Tests in Australia to slip to fourth in the rankings.

Kevin Pietersen was England's leading run scorer with 294 at an average of 29.40. Here are his scores in the five Tests:

But the 45-year-old insisted in a statement that no decisions have yet been made as to how that rebuild will take shape.

"Following speculation in the media, I feel it necessary to reiterate much of what I said in my recent press conference," he said.

"It would be sensible and responsible to review the tour in a calm and logical manner before assessing our options for the future and planning ahead.

"I repeat that neither I nor the wider ECB leadership group have made any decisions as to the future involvement of any individuals in the playing group or in the support staff."

But the South African-born player still finished the series as England's leading run scorer with 294 runs at an average of 29.40.