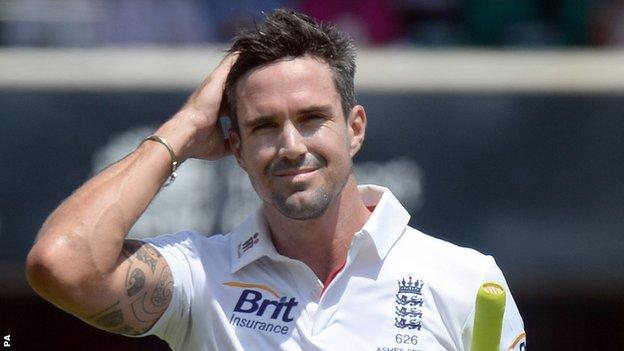 England batsman Kevin Pietersen is "determined to help regain the Ashes" when Australia visit in 2015.

The 33-year-old was England's top scorer in their defeat down under, with 294 runs at an average of 29.

Pietersen added on Twitter: "Very disappointed to lose 5-0 and not to score more runs personally. Tough tour against a top-class team."

But former skipper Michael Vaughan fears England may make Pietersen "a scapegoat" for the Ashes whitewash.

Vaughan, who captained England to victory in the 2005 Ashes, told the BBC: "I'd be getting him more involved - make him vice-captain.

"But my fear is that England will make him the scapegoat and feel the only way they can move forward is without Kevin Pietersen.

"They have to be very careful. This isn't football. You can't just go out and buy a world-class number four batsman."

Pietersen's Test future has been questioned by pundits, including former England captain Geoffrey Boycott, who criticised the South African-born player during the third-Test defeat in Perth.

"When it comes to batting with patience and concentration against disciplined bowling, he just can't do it," said Boycott, who scored 8,114 runs in 108 Tests. "He bottles it."

But Vaughan, 39, believes it would be a mistake if England dropped Pietersen, who has made 104 Test appearances.

He told BBC Radio 5 live: "My fear is they are going to make the big change and get rid of Kevin Pietersen. I think that would be completely the wrong approach.

"I would be getting Pietersen in closer to the management. I'd have him near that think-tank."

Pietersen was England's leading run scorer with 294 at an average of 29.40. Here are his scores in the five Tests:

He added: "At the moment, there are too many people making decisions that are too similar.

"That's why I would go with the maverick Pietersen next to them. Someone completely at the other end of the spectrum. Pietersen would bring a different dimension and then you meet halfway.

"If you just go with the same thing all the time, the same voices and same approach, eventually you get found out."

Pietersen fell well below his Test batting average of 47 down under and was criticised for his risk-taking approach.

Before the series, he said he wanted to continue playing for England until at least the 2015-16 tour of his native South Africa.

"As long as the body goes well, I'm good for it," said Pietersen, who made his international debut in 2004.

Flower, meanwhile, said he "can't be any clearer" about his desire to continue as coach despite the chastening defeat.

While Vaughan, who played in 82 Tests, believes he is the "right man going forward", he says the former Zimbabwe wicketkeeper has much to answer for.

He added: "There has not been enough pointed at Andy Flower. He has got away with it and is the common denominator in this. He has to answer all the questions. He says he saw this coming, so why didn't he do something about it?"

Vaughan said England are "not a great team to watch", adding: "They are a boring bunch. They are a bunch of clones.

"You ask them a question and you know exactly what they are going to say. We are in an entertainment business. We need to see characters."