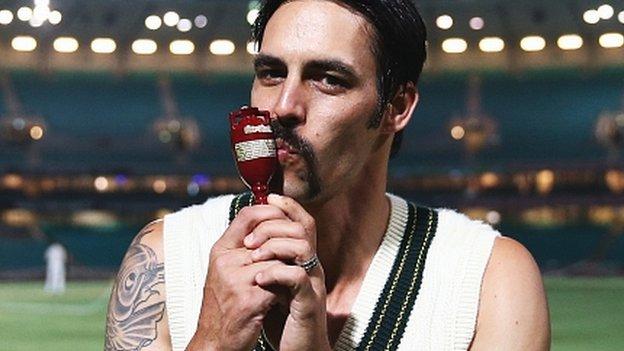 It is doubtful many England fans will take solace from the fact this Ashes series provided one of the greatest stories of deliverance in the history of sport.

Certainly not their batsmen, who have spent the last two-and-a-half months being blown asunder by Mitchell Johnson's pounding song of redemption.

Rarely in the field of sport has one man been derided by so many, so publicly and for such a sustained period as Johnson was during the nine Tests he played against England between 2009 and 2011. "He bowls to the left, he bowls to the right," sung England's sadistic fans. Plus a rude bit tagged on the end I'm not allowed to mention.

"I let it affect me a lot," admitted Johnson, who went from being one of the most feared fast bowlers in world cricket to a figure of fun in the space of a few months. "It's hard not to when that's all you can hear on the cricket ground - your name being sung. And the songs were very catchy."

Fair game? Probably, this is professional sport after all. Cruel? Certainly, especially given that at one point it looked as if the Barmy Army's debilitating ditty might also serve as an elegy for Johnson's career.

The restoration of Johnson, who took 37 wickets in five Tests against Alastair Cook's quivering England, is all the more startling because redemption stories are rare in sport - at least redemption stories of epic proportions, involving a captive audience of millions and starring a protagonist who scales the heights before plumbing the depths before scaling the heights again.

Redemption stories in sport differ from the straight sporting comeback. Michael Jordan came back to win three NBA championships having retired in his pomp. Muhammad Ali came back to win the heavyweight championship of the world after an enforced exile, his reputation having been diminished only in the eyes of wrong-minded people.

A true redemption story requires a protagonist's reputation to be diminished and restored and usually involves atonement for a genuine offence.

Lester Piggott won more than 4,000 races between 1948 and 1985 and the Derby nine times. But in 1987 he was found guilty of tax fraud and handed a three-year prison sentence. Piggott was back in the saddle at the end of 1990 and won the prestigious Breeders' Cup Mile in New York 12 days after his return.

Jennifer Capriati made her professional tennis debut in 1990 at the age of 13 and reached the semi-finals at Wimbledon and the US Open in 1991. But by 1993 Capriati was burnt out and there followed arrests for shoplifting and the possession of marijuana. The American got better and won the Australian and French Opens in 2001 and the Australian again in 2002.

Then there is redemption from on-field offences. David Beckham effigies were hanged after his sending off at the 1998 World Cup and England's subsequent defeat by Argentina, while Manchester United team-mate Eric Cantona was banned for eight months in 1995 after karate kicking an abusive Crystal Palace fan.

Today, it is difficult to think of two more beloved ex-footballers. Cantona is remembered by fans of all English clubs as perhaps the most charismatic player in Premier League history. Beckham, we are often told, is everything our children should strive to be.

But the prime example of how difficult it is to achieve true redemption is provided by Roberto Duran. Duran spent the 1970s building a reputation as one of the wildest, most intimidating fighters the sport of boxing had ever seen.

But in November 1980, Duran quit in the eighth round of his rematch with Sugar Ray Leonard. "No mas (No more)," Duran was reported to have said, before a bewildered referee waved the fight off.

Back in his native Panama, it was as if an entire religion had been discredited. Duran wasn't made of stone, after all. And gods don't quit.

Duran went on to become a world champion in four divisions, from lightweight to middleweight, and was as macho as macho could be in defeat against fellow greats Wilfred Benitez and Marvin Hagler.

But when Duran came to face to face with his old nemesis Leonard last year, you could still see the shame - and the pain - in his haunted eyes: "Is this really all they remember me for?"

Johnson's redemption differs from the examples above in that he committed no offence in the first place. His case is arguably more compelling because at its root is something more mysterious, namely a catastrophic loss of form, something going missing - that something being what made him so vital in the first place.

Sportspeople go in and out of form all the time. Golfers, in particular, live in constant fear of their game falling apart and being unable to rebuild it.

But few sportspeople have gone from such a mighty roar - in his eight Tests before the ill-fated 2009 Ashes series in England, a fire-breathing Johnson took 47 wickets at a little over 21 - to such a pathetic whisper in such a short space of time.

And few sportspeople - having been so diminished and humiliated - have managed to turn that whisper into a mightier roar than they managed before.

Which is why Johnson's deliverance has been so heartening for those close to him who saw him brought so low. That Johnson, by all accounts, is such a shy, sensitive bloke must make it all the more so.

No England fan wants to see their team blown asunder. But at least Johnson's former tormenters have a new song: "He bowls to the left, he bowls to the right, that Mitchell Johnson, he'll balls up your night."