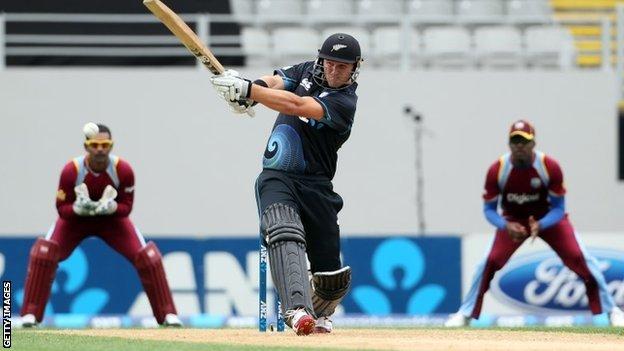 He reached his 100 in a one-day match against West Indies in Queenstown from 36 balls, breaking the record of 37 set by Pakistan's Shahid Afridi in 1996.

The Kiwis made 283 for four in just 21 overs on their way to a 159-run victory in a rain-shortened match.

Anderson was supported by Jesse Ryder, whose 104 was itself the sixth fastest ton in ODIs in only his second match since being left in an induced coma after being attacked outside a nightclub last March.

The pair, who put on 191 for the fourth wicket, came together at 84 for three in the seventh over.

Anderson said he was unaware of the record.

"I didn't have a clue actually. It's not that I'd look it up and try and take it down. But it's nice to have it," he said.

Among some ugly West Indies bowling figures was Ravi Rampaul, who went for 64 runs off three overs. The tourists, who won the toss and put New Zealand into bat, made 124 for five in reply.

The result left the five-game series tied at 1-1 with two matches remaining.