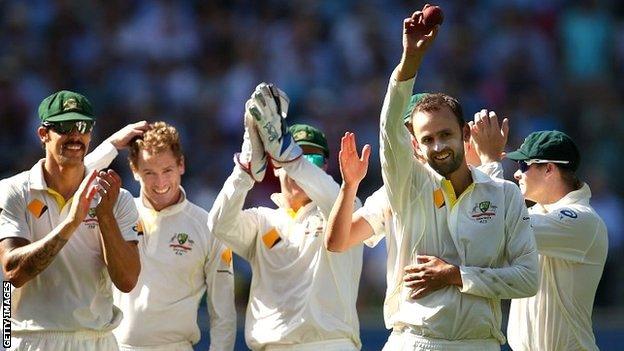 Australia need 201 more runs with all 10 wickets still in hand to win the fourth Test and move within a match of a series whitewash after another horrible day for England.

Looking to build on a first-innings lead of 51, England twice lost three wickets for one run and tossed away their last five for just six runs in a lame batting display.

Only Alastair Cook (51) and Kevin Pietersen (49) made significant contributions as four batsmen fell for ducks in a total of just 179, leaving Australia to make 231 for their fourth win of this one-sided Ashes series.

"This day promised a great deal for English cricket but finished really disappointingly. I feel very dejected after feeling this was England's best chance to win for a long time.

"I'd like to be in the dressing room telling them what I think. They think they're better than they are, they've won three series against ordinary Australian sides and they think they're world beaters."

By the close David Warner and Chris Rogers had added an unbeaten 30 with minimal discomfort to further dampen English expectations that had been so high after Friday's second day.

No team has ever successfully chased more than 183 in the fourth innings to win a Test at the MCG since drop-in pitches - a term describing a pitch that is prepared away from the ground and slotted in for the match - were introduced 17 years ago.

But the pitch remains good and England will have to bowl better than they have all winter if they are to snatch their first victory since August.

Given the match situation this may have been the most wasteful day of the sorry series as Nathan Lyon took 5-50 with minimal turn and Mitchell Johnson made it 31 wickets in the series.

Australia had added a brisk 40 runs for the last wicket to take their first innings to 204, Brad Haddin the last man out for another invaluable rearguard, this time of 65, to give him a series average of exactly the same.

No wicketkeeper has ever scored more runs in an Ashes series, and with Lyon's unbeaten 18 it threatened to do more than merely irritate England.

Cook set off at a clip, driving and cutting nicely to race along at almost a run a ball as he became the youngest man in history to pass 8,000 Test runs.

Michael Carberry, by contrast, was rendered almost strokeless, stuck for 36 balls on just one, but it was his captain who was first to go when he had made 51 of the pair's 65.

Johnson found some late in-swing from over the wicket and Cook, back in his crease, was struck halfway up his static front leg to be lbw.

Joe Root almost followed two balls later only to be reprieved when his review ruled that he had not edged behind.

England, however, failed to press home that kind advantage. First Carberry's troubled innings ended on 12 when he was trapped lbw by Peter Siddle, and then Root gambled on a quick single only for Johnson at mid off to throw down the stumps in brilliant fashion.

It was to get worse. To the very first ball he faced Ian Bell simply pushed a straight ball from Lyon up in the air and into Johnson's hands at mid-off, meaning England had lost three wickets for just one run.

With the lead only 138 Pietersen and Ben Stokes then batted with commendable calm as the afternoon sun kicked in to weary the Australian attack.

Stokes had looked comfortable but then decided to take Lyon on and instead holed out to Steve Smith at a deepish mid-off for 19 with the score on 131.

"Brilliant day from Australia. I can't imagine what's going to be said among the England team tonight. There's still a possibility England could cause a shock, they certainly could get the 10 wickets, but whatever happens this batting needs to be looked at, you can't keep throwing wickets away."

Fortunately for England at least Pietersen was playing with both control and class, neither slogging nor getting strangled.

In partnership with Jonny Bairstow - who got off the mark with a straight six off Lyon - he took the score to 173 and a lead of 224 before recent history repeated itself to miserable effect.

Bairstow chased a full, wide one from Johnson to be caught behind for 21, and as another huge crowd at the MCG roared their team on, the remaining four wickets followed in rapid and often bewildering fashion.

Tim Bresnan tried to pull Lyon and was bowled for a nine-ball duck, Stuart Broad aimed a big drive at his third ball to be caught at slip in the same over and then Pietersen, running out of options, attacked the off-spinner and perished to a fine steepling catch from Ryan Harris running back at mid-off.

Monty Panesar could do nothing to keep Johnson's fast straight delivery at bay, and from a position of strength England had once again handed the advantage to their opponents.

Neither Rogers nor Warner looked in any difficulty in the half-hour they faced before the close, and Australia will be confident that they can close the match out on Sunday to go to Sydney with a second 5-0 whitewash in three Ashes series down under within their grasp.