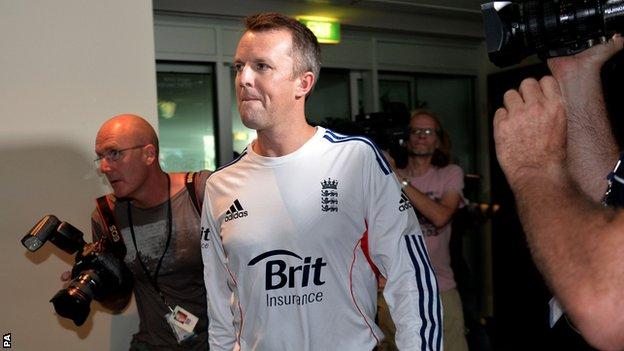 Former England spinner Graeme Swann says he was not referring to anyone in the current squad when he said certain players are "up their own backsides".

The 34-year-old, who announced his retirement from cricket on Sunday, did not name specific players when he used the description.

But he later contacted former captain Michael Vaughan to deny he was referring to England players.

He tweeted: "I wasn't talking about the England dressing room or anyone in it."

Swann has never been frightened to speak his mind about cricket.

In his autobiography, The Breaks Are Off, published two years ago at the start of an England one-day international tour of India, he caused a stir with his appraisal of Kevin Pietersen's captaincy.

Swann wrote Pietersen was "never the right man to captain England", though he later said: "With hindsight, I would probably have worded it a bit differently."

Pietersen captained England only fleetingly before he and coach Peter Moores both lost their jobs at the start of 2009.

Swann, who was also critical of his former England and Nottinghamshire team-mate Samit Patel in his book, retired in the middle of an Ashes series England have already lost after defeats in the first three Tests.

He left others to draw their own conclusions when he said: "Some people playing the game at the minute have no idea how far up their own backsides they are.

"It will bite them one day and when it does I hope they look back and are embarrassed about how they carry on."

With 255 victims in his 60 Tests, Swann is behind only Derek Underwood as England's most prolific wicket-taking spinner.

Asked to reflect on his own career, Swann said he wants to be remembered as someone who brought enthusiasm as well as a competitive edge to Test cricket.

"I hope my legacy is someone who always enjoyed it, who always played with a smile on his face, sometimes a snarl when the fielders mis-fielded," he said.

"Since I got back in the England team, I've treated every day like a lottery win. It really annoys me when people take it for granted and get above their station, because they shouldn't.

"It's the most privileged thing any man can do."

Swann's father Ray expressed his pride at his son's career exploits and believes the decision to retire had been coming.

"It's been on the cards for quite a while," he told BBC Radio Northampton.

"Graeme, very much like myself, once he's decided it's the right thing to do, he'll have gone ahead and done it.

"We fully support what he did, the way he's done it, and as parents we are immensely proud of the career he's had."

He added: "Northamptonshire were the first ones to give him a chance - John Emburey in the initial years and Matthew Hayden when he was there.

"They gave him belief in himself that he could perform at that level. I wouldn't say he ended his time on a high at Northampton, with a well-documented spat with Kepler Wessels, but they gave him a great start and Nottinghamshire helped him on his way."

Australian bowler Peter Siddle refused to get drawn into Swann's criticism of certain players but talked about the spinner's retirement.

"He's had a great career," said Siddle. "I've enjoyed my time playing against him. He's always been a big challenge."