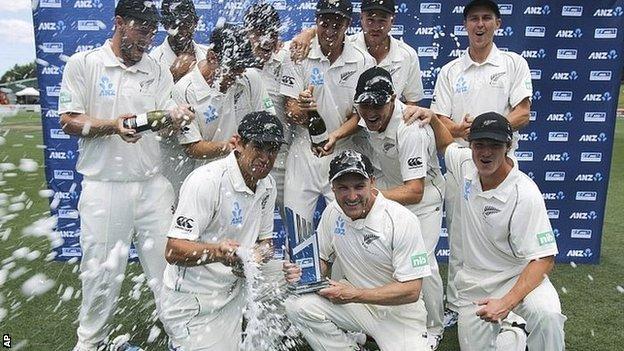 New Zealand beat West Indies by eight wickets to clinch their first victory in a three-Test series since 2006.

The home side, who won the second Test by an innings and 73 runs, needed just 122 runs on day four in Hamilton to seal a 2-0 series triumph.

It is the first time New Zealand have achieved back-to-back Test victories against a top-eight side since March 2006 - also against West Indies.

The win was New Zealand's first in 11 Tests under captain Brendon McCullum.

"We've had a pretty tough time of late. I think we've played some good cricket at home and haven't always got the results.

"But I think we've been putting in some pretty consistent performances at home and to put some results on that is obviously very nice."

West Indies captain Darren Sammy warned changes would have to be made to his team.

"We definitely cannot continue like this," said Sammy, whose side suffered two innings defeats by India before this series and were saved by rain in the first Test against New Zealand.

"A lot of tough decisions have to be made. Probably some careers are on the line - could be mine as well.

"Sometimes we're moving forward but we take two steps forward and probably three or four backwards so I guess we're not really moving."

New Zealand trailed by 18 runs on the first innings but dismissed West Indies for 103 in their second.

The hosts resumed their second innings on the fourth morning at 6-0 and wrapped up victory with few complications.

Former captain Ross Taylor made 131 in the first innings to become the first New Zealander in more than 40 years to make centuries in three-straight Tests.

He scored 495 runs in five innings in the series and was only dismissed twice. He now averages 72.16 from 10 Tests in the 2013 calendar year.

Seamers Trent Boult and Tim Southee dominated the visitors' batsmen, with Boult taking 20 wickets at 15.40 and Southee 18 at 18.11.