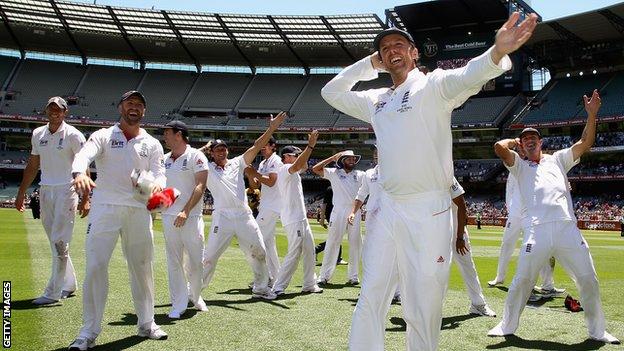 There was a moment last week, late in the whacking at the Waca, when you wondered whether something fundamental had changed in Graeme Swann.

Swann at his best, for all the clowning, was also relentlessly competitive throughout his late-flowering England career. So in that resigned third Test over - all 22 runs of it - came the clues for what was to follow early on Sunday morning in Melbourne, when he abruptly called a halt to his Test career after 60 matches and 255 wickets.

Nothing should really feel that unexpected any more on an England tour that began poorly, lurched towards embarrassment and is now parked somewhere between farce and ignominy.

All the same, the dramatic departure of the man who was both the pivot of their four-man attack and the wise-cracking heartbeat of the dressing-room marks decisively the closing of a cricketing chapter for this once all-conquering England side.

Jonathan Trott is on indefinite leave with his stress-related illness; coach Andy Flower has refused to commit beyond January; three critical yet ageing senior players - Kevin Pietersen, James Anderson and Matt Prior - are each enduring their worst spell in years; and captain Alastair Cook is averaging less with the bat than the opposition's fast bowler.

For a team that came into the series as favourites, who won three consecutive Ashes, who went to number one in the Test rankings for the first time in history, these are now the End-of-Era Ashes.

How quickly empires can fall.

There are those who will find fault in Swann's timing, which some could claim was made to maximise publicity for his tabloid column back in the United Kingdom.

He only informed Cook and Flower of his decision late on Saturday and told his team-mates at a net session at the MCG early on Sunday.

Some will also read into it a calculation that he was about to be dropped for the Boxing Day Test after taking just seven wickets at 80 runs apiece in this Ashes series.

As Swann said at his valediction, we will never know for sure whether the Test trap-door was indeed about to open. But the manner of his departure from the game should not obscure how much he gave to the England team, nor how essential he was to its defining days.

For a bowler whose first-class career at Northamptonshire began with figures of 1-91 off 13 overs - blame Surrey batsman Ali Brown for that - and spluttered to such an extent that he had to wait a further decade for his Test bow, he ends in company with the best.

He is the sixth-highest wicket-taker in his country's history; has statistically only Derek Underwood above him as a spinner; and claimed more wickets since his debut in December 2008 than any other bowler in Test cricket, including Dale Steyn and James Anderson.

In some ways, the mistakes that characterised his earlier years - oversleeping to miss the team bus on his first England tour in 1999, overestimating his own charm to such an extent that Darren Gough punched him in South Africa - helped him cherish all that was to follow.

Revitalised by a county move from Northamptonshire to Nottinghamshire in 2005 and the input of coach Mick Newell and captain Stephen Fleming, Swann was rehabilitated at international level by Peter Moores in one of the unlamented England coach's few lasting achievements.

In his first over in Test cricket, he took the wickets of both Gautam Gambhir and Rahul Dravid - only the second man in history to start his career in such style - and over the next five years was there as both spinning spearhead and darting defence in all of England's great moments.

As an off-spinner, he came into Test cricket at a good time, when the advent of the decision review system made it considerably easier for bowlers of his type to win lbw decisions.

But if bowlers had in the past been denied that assistance, so Swann never benefited from uncovered pitches and also had to battle springier bats and shorter boundaries than Underwood and his legendary like.

In the Ashes series of 2009 came critical roles in the victories at Lord's and the Oval, including the last wicket to fall on that final improbable day in south London, when he had Mike Hussey caught to win back the urn and trigger nationwide celebration.

In between came perhaps his greatest ball - the clean-bowling of Australia captain Ricky Ponting at Edgbaston - and afterwards came even more: nine wickets in the unlikely defeat of South Africa in Durban; and five in the second innings as England thrashed Australia in Adelaide on the last, utterly contrasting tour down under.

In the summer, despite elbow surgery earlier in the year, he was at it again. He was England's leading wicket-taker with 26 in the series, including his 16th five-wicket haul, and became in the process the first English spinner since Hedley Verity in 1934 to take five wickets in an Ashes Test innings at Lord's.

The decline has been as swift as it was inarguable. "I wasn't performing to a level that I thought was acceptable to myself or the team," he said on Sunday. "You know when you're ready to go." Three years ago there was the sprinkler; this time there is only burn-out.

England will miss more than his wickets. His ability to bowl long parsimonious spells allowed the team to operate with just three other specialist bowlers. His catching at second slip - 54 in Tests alone - helped those other men to succeed.

Then there is his character, a relentlessly lively presence in a team otherwise overly biased towards introspection. He could be a pain in the backside, but, on long tours and tough days, his latecomer's relish for what to some others had become a job was both idiosyncratic and indispensable.

Much of that had been lost on this most dispiriting of trips, when Australia's stated aim of targeting him with both bat and ball paid dividends in a way that even the wild fantasies of coach Darren Lehmann and captain Michael Clarke could not have envisaged.

But that is what happens on tours like this. As results collapse and morale follows, careers come crashing down with them.

With two Tests still to come, England are not only three matches behind but two vital players down. The coach may yet follow suit, while only the wildly optimistic would bet against more big names going the same sorry way. There are holes to fill - and the holes are growing.