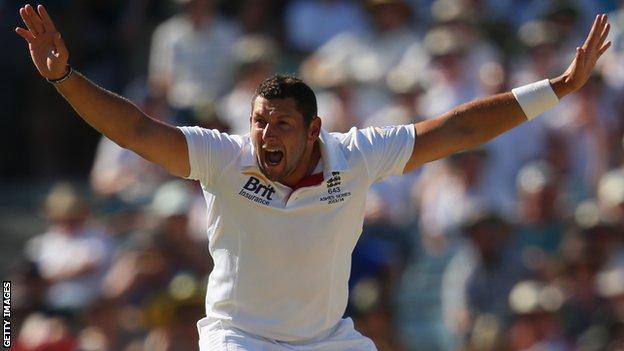 England bowler Tim Bresnan says the tourists will use the Boxing Day Test in Melbourne as a springboard to bounce back from their "lowest point" after losing the Ashes to Australia.

England's 150-run defeat in Perth meant the hosts regained the urn by taking a 3-0 lead in the five-Test series.

"How you bounce back from the lowest point is how you're judged as a team."

He added: "The Ashes are gone but we are still playing for pride.

"It's Boxing Day, it's Melbourne and you don't get much bigger than that - there's certainly no bigger crowd in world cricket, so I think the boys will be up for it."

But the Yorkshireman admitted that morale around the team is very different from three years ago, when England retained the Ashes with victory at the MCG.

"There's been a strange atmosphere around the place," he said.

"There's a feeling of huge disappointment and what might have been, if we'd have got runs here or runs there. But at the end of the day we weren't good enough."

Bresnan also rejected calls for some members of England's Ashes side - notably Graeme Swann and Matt Prior - to be dropped after disappointing series down under.

He added: "I think those guys will be fine. It's the little things that give you confidence and I think a few will come out with a bit more confidence from the last Test. The way Ben Stokes played should give the team confidence.

"There's definitely a kneejerk reaction that goes on, whether it's after losing a series or losing two Tests in a row.

"I think people forget we have been successful for the last five years and this is the first series we've actually lost that I can remember.

"It is disappointing but this is where the test comes - the way we bounce back from it."