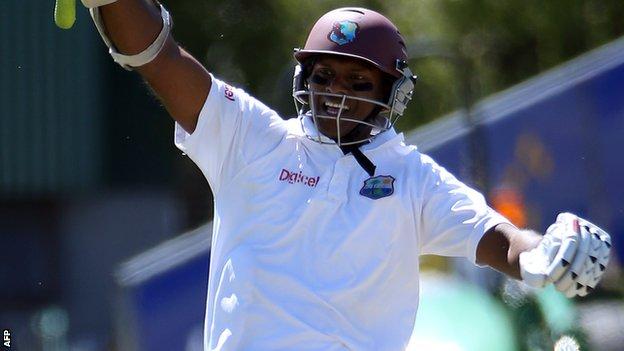 Shivnarine Chanderpaul has become the sixth highest run-scorer in Test history after posting an unbeaten 122 against New Zealand in Hamilton.

The 39-year-old is now only 754 runs behind compatriot Brian Lara, who is fifth on the all-time list.

"I'm just trying to take each game as it comes along and trying to do as well as I can," said Chanderpaul.

It was his 29th century overall and his 17th unbeaten ton - one more than the recently retired India legend Sachin Tendulkar.

Chanderpaul was keen to pay tribute to former Australian captain Border, who retired in March 1994, the same month in which the Guyanese made his Test debut.

"Border is a great man and scored a lot of runs against us in the past - and we have a lot of fast bowlers!" said Chanderpaul.

New Zealand ended the second day in Hamilton on 156-3 after West Indies were bowled out for 367.

The hosts lead the best-of-three series 1-0, following a dramatic drawn first Test and a comprehensive victory in the second.