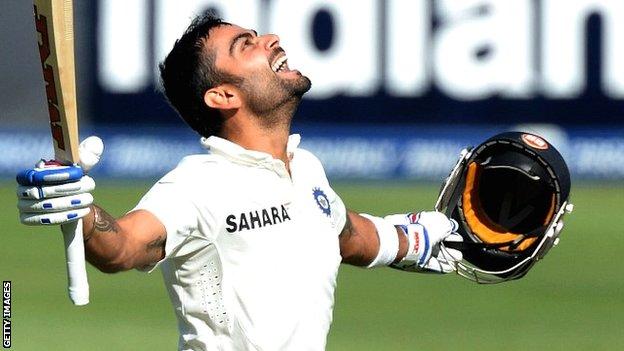 Virat Kohli struck 119 to help India to reach 255-5 on the opening day of the first Test with South Africa.

Batting in the number four position vacated by the retirement of Sachin Tendulkar last month, Kohli hit 18 boundaries in his fifth Test century.

He had come to the crease in the 16th over after the India openers were dismissed cheaply in Johannesburg.

Kohli departed in the 76th over but Ajinkya Rahane, in only his second Test, recorded an unbeaten 43.

The 25-year-old, who made only seven and one on his debut against Australia in March, shared an unbroken partnership of 36 with skipper Mahendra Dhoni who had earlier chosen to bat on a wicket offering some assistance to the bowlers at the start of the two-match series.

Kohli seized on anything short but having shared 89 with Cheteshwar Pujara he called for a quick single only to send his partner back when he had almost joined him at the striker's end, with Pujara easily run out for 25.

Having reached his first Test hundred against South Africa and become only the third India batsman to make a century in Johannesburg, Kohli fell when he scooped a wide ball from Jacques Kallis to cover, the 289th Test wicket for the veteran all-rounder.