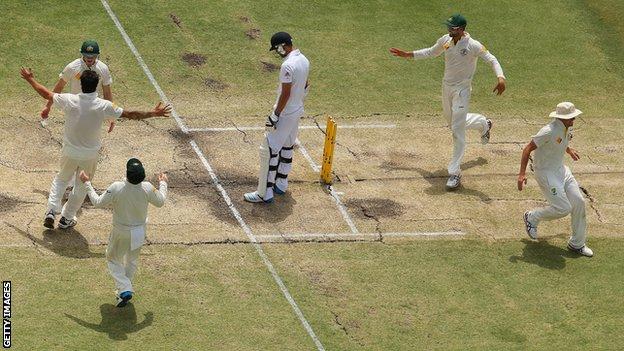 Australia have regained the Ashes after sealing a deserved 150-run win over England in Perth to take an impregnable 3-0 lead in the five-match series.

Despite a redoubtable maiden Test century from Ben Stokes in only his second match, Michael Clarke's men took the final five wickets they needed by early afternoon on the final day to end England's 1,577-day ascendancy in cricket's oldest rivalry.

The celebrations began at 13:44 Perth time (05:44 GMT) when Mitchell Johnson - the outstanding player of the series - had James Anderson caught at short leg, and they are likely to be long and raucous after a sustained and painful drought for Australian cricket.

While this scoreline at this stage was predicted by few, Australia's first Ashes series triumph since 2006-07 has been entirely merited after they have dominated all but one day of the series.

Their margins of victory - 381 runs in Brisbane, 218 in Adelaide and now this thumping at the Waca - are a fair reflection of the performances of the two sides, and England will go to Melbourne and Sydney for the remaining Tests in real danger of a 5-0 whitewash.

Stokes was the sole silver lining to emerge from the English gloom of this third Test as he hit a technically excellent and impressively gutsy 120 in a total of 353.

While he and Matt Prior were together in a partnership of 76 on Tuesday morning, there was the briefest period of cruel hope for the English supporters who were in the majority in a sparse crowd.

But when Prior wafted outside off stump to be caught behind off Johnson for 26, that illogical illusion was quashed, and when Stokes followed after lunch, caught behind off a ball from Nathan Lyon that stayed low, the inevitable soon followed.

Tim Bresnan was brilliantly caught by Chris Rogers for 12 from Johnson's slower ball, and Graeme Swann popped a bat-pad catch off Lyon to Steve Smith at short leg for four.

Anderson's demise sealed a seventh consecutive win for Australia over England at this ground, and while the continuation of the Waca hoodoo came as little surprise, the turnaround in the balance between these two teams is truly remarkable.

It is less than four months since England won the corresponding Ashes series at home by a 3-0 margin, while Australia came into this series on a run of seven defeats and not a single victory in their last nine Tests.

Great credit must go to Australia coach Darren Lehmann, who took over a team in disarray last summer and has forged a side that is both settled and successful.

For England it is a dismal and chastening end to an era which has seen them win three consecutive Ashes series and go to number one in the International Cricket Council's Test rankings.

With several pivotal players in that team horribly out of form, there are likely to be several changes to the side before the fourth Test begins at the Melbourne Cricket Ground on Boxing Day.

Serious questions will also be asked of how a side with so many experienced players and such an impressive track record could fold so completely so quickly.

But for now it is Australia's time to enjoy the return of the urn and all the praise it will bring them in this country.

At the head of the charge has been left-arm paceman Johnson, whose 4-78 in England's second innings mean he now has 23 wickets at an average of 15.

Yet Australia have been demonstrably superior in all departments, with the best five batsman by average, the top four bowlers, the better wicketkeeper and better fielding, and they revelled in Anderson and England's demise with fitting fervour.

Comments are now closed on this story. To continue the discussion read Tom Fordyce's analysis.