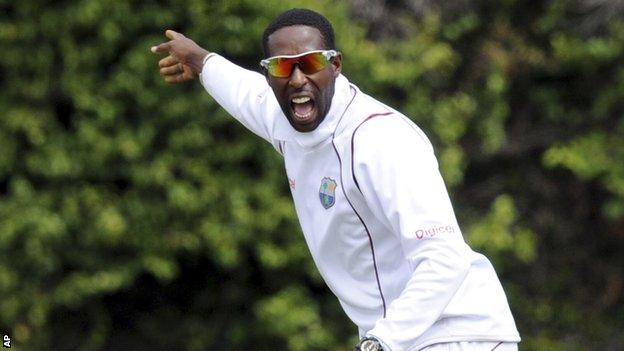 West Indies off-spinner Shane Shillingford has been suspended from bowling in international cricket by the International Cricket Council (ICC).

Shillingford, 30, and team-mate Marlon Samuels were both reported to the ICC for suspected illegal actions during last month's Test series in India.

Meanwhile, Samuels, 32, has been banned from bowling his quicker deliveries.

Shillingford's arm was found to extend more then the permitted 15 degrees for his off breaks and doosras.

Samuels exceeded the 15-degree limit for his quicker balls, but he is allowed to continue bowling his standard off breaks.

A batting all-rounder, he has played for the Windies as a specialist batsman before now, although Shillingford - a specialist bowler - now faces withdrawing from international cricket until he remodels his action.

The pair have 14 days to lodge a written appeal to the ICC, although West Indies are currently in the middle of a Test series in New Zealand.

Shillingford and Samuels both played in the first two Tests, although Samuels did not bowl.

The third Test begins in Hamilton on Thursday, with one-day and Twenty20 internationals to follow.

Both players have previously been suspended from bowling in international cricket for illegal actions.

However, they were allowed to resume bowling after undergoing remedial work and further testing.

Samuels was banned from bowling in February 2008 because his arm extended more than the permitted 15 degrees for off-breaks and quicker deliveries.

Although the Jamaican continued to play as a batsman, he did not resume bowling in international cricket until September 2011, having served an unrelated two-year suspension from cricket between May 2008 and May 2010 for passing information to a bookmaker.

Shillingford, from Dominica, was reported after his international debut in November 2010 and banned a month later when his average elbow extension was found to be 17 degrees. He was cleared to return in June 2011.