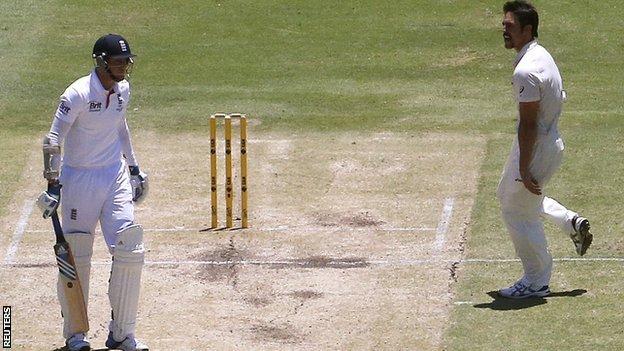 England's worst day of the series?

Broad hit on right foot by Johnson. Sent for X-ray, does not bowl.

Warner on the charge, though twice missed by Prior. Another hundred.

In an Ashes series of permanent lows for England, the third day in Perth seems the lowest.

Resuming on 180-4, England needed a contribution from the lower order to get close to Australia's 385.

But, just like the rest of the series, there was little resistance. So poor has England's batting been, this did not seem like a collapse, more an inevitable surrender.

Overall, the final six wickets fell for 61 runs, shared by the pace trio of Mitchell Johnson, Peter Siddle and Ryan Harris. England 251 all out, a deficit of 134.

In five innings so far, England's last five wickets have contributed an average of 58.40 runs. 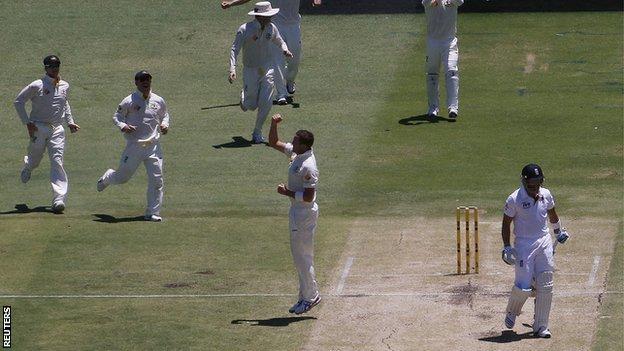 After his Birmingham-bar altercation with Joe Root and subsequent exile from the Australia team, it seemed fanciful that David Warner could be the highest runscorer in an Ashes series.

After England's capitulation, their attack was plundered by Warner, who brought up his second century of the series from 127 balls.

He had some help, two stumpings were missed by Matt Prior, who was also involved in some verbals with the left-hander. When Warner brought up three figures, his helmet-off celebration was aimed in Prior's direction.

In total, Warner, Michael Clarke and Brad Haddin have scored more runs in the series than the whole England team combined. 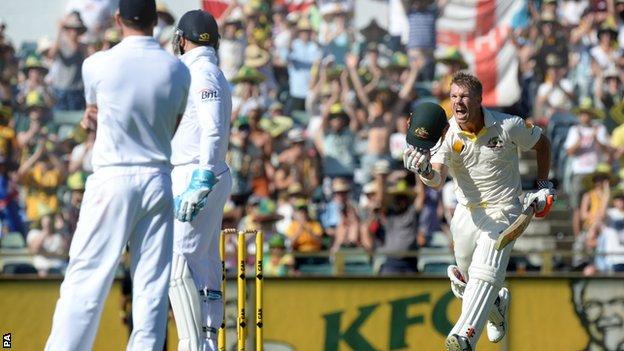 After all the furore surrounding Stuart Broad not walking during the first Test of the summer, Johnson did his bit to make any further walking uncomfortable for the England paceman.

A spearing, toe-crunching yorker not only pinned Broad lbw, but also left him with a foot injury.

England returned to the field without Broad, who was sent for an X-ray.

The Nottinghamshire man, who returned from the last tour down under after two Tests because of a stomach strain, ended the day on crutches, wearing a protective boot.

He confirmed he will not bowl in the rest of the match, but will bat when required.

England pace bowler Stuart Broad: "Something showed up on the X-ray that was inconclusive. I've had an MRI scan which has been sent back to the UK. I won't play a part tomorrow, but hopefully in the future.

"It's very unlike this England side not to score hundreds and not bat long. The batsmen have proven records, so you can't doubt them too much. It's tough when things are going against you, but there's a lot of hard work going on and belief things will change."

Australia batsman Chris Rogers: "We'll bat for a while tomorrow, maybe until after lunch, then attack England hard. After the tour of England, a lot of us were hurting, so to come back and win 3-0 would be amazing."

Heads dropped, stumpings were fluffed and catches were missed. Then, the sight of Stuart Broad appearing on crutches at the end of the day after being hit on the foot by Mitchell Johnson gave the whole thing a calamitous feel. Now, even the most positive are wondering how England are going to avoid a 5-0 whitewash. I usually leave the headline-grabbing predictions to others, but even I am struggling to see how they will not get an absolute caning.

Former England captain Michael Vaughan: "I remember being on the pitch after the 2010-11 Ashes. There were a lot of the ECB hierarchy on the pitch, talking about how the Schofield report after the 5-0 in 2006-07 had changed everything, and how that would never happen again. But it will be 5-0 here unless something drastically changes. Australia can smell blood, they're not going to let up. Australia aren't going to rest Johnson, Harris and Siddle because the Ashes are won - they'll want to humiliate you."

Ex-England batsman Geoffrey Boycott: "I'm dejected. There was just nothing there to lift the spirits of the supporters. The wheels are coming off, sadly. I never believed it but now I can feel it, it's a 5-0 drubbing coming. I will never say people aren't trying. I know they are. I have been there, I know what it's like. But it's not there. Their brains are scrambled."

Former Australia seam bowler Glenn McGrath: "England are great front-runners, but when it is not happening they sit back and wait for something to happen. They have to change something in the last two Tests. The last thing they want to do is come here as favourites and lose 5-0."

Sun cricket correspondent John Etheridge: When a team is being hammered, there are some things that look faintly ridiculous with the benefit of hindsight. Like 82-page recipe books.

Wisden editor Lawrence Booth: People are wondering what will happen if Broad is ruled out for the rest of the series, as if 6-0 is suddenly a possibility...

With temperatures throughout the Test match regularly exceeding 40C, a TV company illustrated the extreme heat on what has been the hottest day of the match so far.

Cracking a raw egg on a tiled floor at the Waca, pictures showed the egg slowly frying.