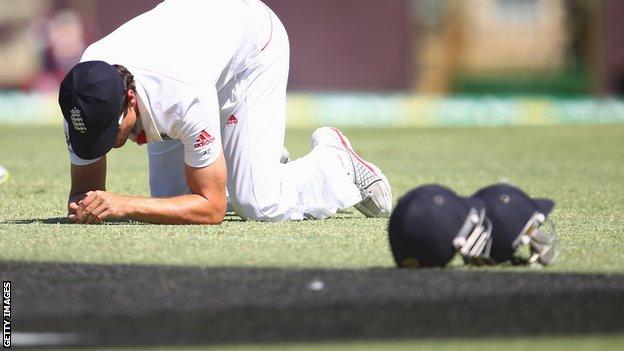 Australia took total charge of the third Test as England's slim hopes of an Ashes fightback disappeared on a one-sided third day in Perth.

Having lost their last six wickets for just 61 runs to concede a first-innings deficit of 134, Alastair Cook's men then lost control in the field as Australia piled on 235-3 to lead by 369 runs.

With paceman Stuart Broad unable to take the field after being sent for scans on an injured foot, leaving the tourists a bowler short in searing heat, David Warner was able to profit freely as he smashed 112 with 19 boundaries after escaping a clear stumping chance on just 13.

"For the third match in a row, Australia have had no pressure whatsoever in the second innings. Rogers and Warner might as well have gone out with flip-flops and cigars. This has been a dreadful, dreadful day for English cricket."

Ben Stokes bowled Michael Clarke for 23 in the last 30 minutes but it did little to lift English moods or alter the balance of power.

Even on a tour that has contained minimal cheer for England's players and supporters, this was perhaps the most chastening day of all as sloppy dismissals were followed by cannon-fodder bowling and missed chances.

With two days of clear, hot weather still to come and England yet to pass 312 in any innings in the series, a third consecutive Australian victory and with it their first Ashes triumph in seven years seems inevitable.

A day that ended with England in disarray actually began with some optimism, only for Ian Bell and Stokes to fall in tame fashion with only 18 runs added to the overnight 180-4.

Bell went lbw to Ryan Harris on review for 15 while Stokes, after showing considerable discipline for an hour and a half, pushed needlessly outside off stump to be caught behind off Mitchell Johnson for 18.

Matt Prior's dismissal further set the tone for what was to follow as he aimed an airy pull at Peter Siddle and got a bottom edge to keeper Brad Haddin to leave his side 207-7.

Broad was then trapped lbw as a full-pitched Johnson inswinger hit him flush on his right boot, and while the dismissal did little to change the course of the match, the damage may yet rule Broad out of more than just Sunday's play.

Tim Bresnan struck out briefly for 21, but when he became Harris's third victim it meant England had lost five wickets for 43 in the morning.

In all, their 10 wickets fell for just 165 runs following the opening stand of 85, a display put into further context by the ease with which Warner and Chris Rogers then set about extending the lead.

Batting in an almost entirely pressure-free situation, Warner raced to a half-century of which all but eight runs came in boundaries.

Prior had been guilty of missing a stumping chance off Graeme Swann when Warner was just getting into his free-hitting stride, and then left an edge from Rogers on 28 to Cook at first slip, who could not react in time to cling on.

It summed up England's slow-motion cricket. Warner pillaged 81 runs in the afternoon session as Australia went to tea 123-0, and although Rogers went for 54 after cutting Bresnan to Michael Carberry at backward point, Warner slapped away his 15th four to go to his second century of the series off 127 balls.

After hitting Swann back over his head for his second six he then holed out to long on, but Clarke and Shane Watson progressed comfortably through the evening session until Stokes nipped one between Clarke's bat and pad with six overs left.

Watson will resume on 29 and Steve Smith five as Australia look to move into a position of impregnability in both match and series.