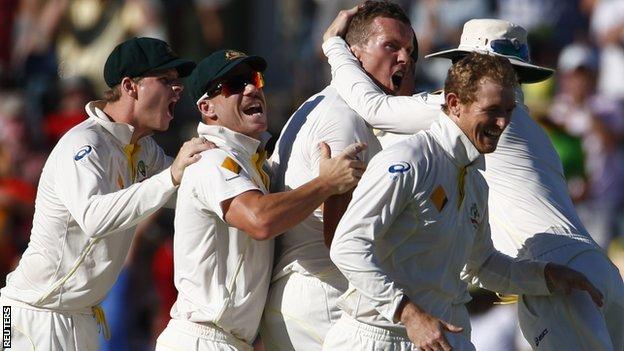 While Australia were cruising to huge victories in the opening two Tests of this Ashes series, much of the talk has been about the brilliance of Mitchell Johnson.

Johnson has claimed 17 scalps, but is wicketless in 15 overs in the third Test and 38 in total if we stretch back to the second innings of the second Test in Adelaide.

But, even without Johnson finding success, the home side were magnificent on the second day in Perth to reduce England to 180-4, 205 runs behind.

Ryan Harris and Peter Siddle bowled out of their skins on an unresponsive pitch in stifling, 40 degree heat. They dried up the runs, were aggressive without resorting to silly sledging and produced tough, uncompromising Test cricket.

"They bowled brilliantly. They bowled aggressively to a disciplined line, denying us runs. They have all parts of their armoury functioning well. They are decent bowlers who dry up the runs and squeeze the pressure and it looks so much hard work for England to bat."

Supported by Nathan Lyon and Shane Watson, they put England under real pressure in a spell of absorbing play that, for some time, it looked like the tourists would come through.

Before this match, England had spoken of their need to fight, and that is exactly what they did - very hard indeed.

Eventually, though, both Alastair Cook and Kevin Pietersen played poor shots, meaning the lower order will be exposed to a new ball, which is due 12 overs into the third day. Because of that, and the way that Johnson has terrorised the England tail in first two Tests, you can't help but feel that Michael Clarke's men have the advantage.

People will talk about Pietersen, because his pull to mid on off Siddle was an awful shot, but, in his defence, he did knuckle down before that.

This was the slowest start he has ever made to a Test innings - he was focused, concentrating. Then, suddenly, he plays a stroke which wouldn't have looked out of place in a one-day game and you're left scratching your head as to why he would do that.

We have been here before with Pietersen, and there seems little point in lambasting him once more. It is just the way he plays. That is not said as a compliment, but what else are we seriously expecting from him?

The England management will have rammed home time and time again the importance of working hard, playing for the team and that is what he was doing.

But, it is a weakness that he is unable to bat defensively for long periods of time. That failure is a great shame, because Pietersen can be as good as any other batsman in the world.

While Pietersen was responsible for his own dismissal, Joe Root will look upon his with some disappointment at the Decision Review System that condemned him.

I have seen no evidence to support on-field umpire Marais Erasmus's decision to give Root out caught behind off Watson. There was no deflection, nothing on Hot Spot and my TV colleagues told me there was no sound.

Yet, we have this questionable protocol that you have to prove, off the field, that the man in the middle has got it wrong. How do you prove that someone hasn't nicked it?

Root did not think it was out and the body language of the Australians suggested they didn't think it was either. Maybe he got a bad one, but you have to respect the umpire's decision. We expect technology to be right all the time, but we keep seeing that it isn't.

While people are satisfied with a system that is not perfect, we have to use it. Personally, I would prefer to wait until it improves. At the moment it is being rushed, which results it decisions like Root's.

The upshot of all of this is that England, first in the shape of Ian Bell and Ben Stokes, then through the lower order, must do all they can to get them up to Australia's total of 385.

England have to muster another 150 runs, not give Australia a lead of any more than about 80 runs. If they manage that, then they have the chance to win the game, if not, then they are struggling.

In that situation, and with Johnson unlikely to remain wicketless for long, you would prefer to be in Australia's situation.