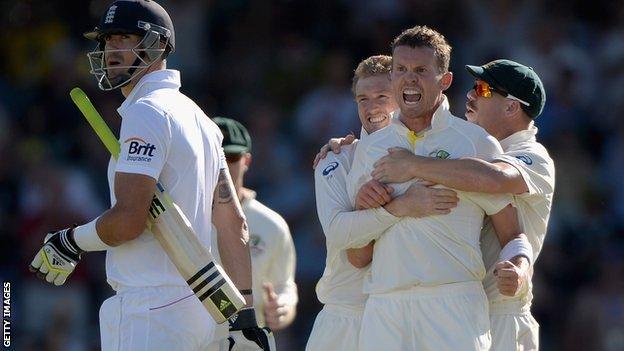 England's grip on the Ashes slipped still further as Australia refused to relinquish control of the third Test in Perth.

Setting out to overhaul Australia's first innings 385, they lost the key wickets of Alastair Cook and Kevin Pietersen in a dramatic three-over spell late in the day to close on 180-4, still 205 runs adrift.

And with the Waca pitch showing sign of wear and Australia's attack offering a threat with both pace and spin, England face a struggle to achieve parity, let alone a position where they can push for more.

In contrast to the unhappy collapses in the first two Tests in Brisbane and Adelaide, the tourists' batsmen showed better application and discipline for much of another blisteringly hot day.

Yet relentlessly tight bowling brought its reward as Australia chased the victory that would win them back the Ashes for the first time in seven years.

England had prospered in the first half of the day until a significant chunk of those foundations came crashing down in the gripping exchanges that followed in an enthralling afternoon and evening.

While much of the damage was done by Australia's probing five-man attack, there was also controversy in the pivotal moments.

With the score on 90-1 10 minutes before tea, umpire Marais Erasmus initially gave Joe Root out caught behind off Shane Watson, and although the review requested by the batsman produced no clear evidence of an edge, third umpire Tony Hill decided that neither had he seen enough to overturn the decision, and Root was gone for four.

"This is England's opportunity to make sure they have learnt from the last two games. They just need to look to get close to this 385. If they could do that, they might just get that buzz in the dressing-room thinking they can win the game. They haven't had that in the first two Tests. They are in the game.

"Pietersen deserves the criticism. He is a senior player and his five dismissals have not been good enough. With the level of performance we have seen from him, he is too good a player to be playing shots like he has in this series."

The match and thus the series hung in the balance, and Cook reacted with characteristic determination even as Pietersen was forced to play with unusual defensiveness.

The number four managed only three singles from the first 38 balls he faced - his slowest start in Test cricket - as Watson and Ryan Harris both found movement through the air and off the parched deck.

Cook's second half-century of the series came up off 127 balls, but both batsmen were increasingly bogged down against the seamers, and when Nathan Lyon came on the tourniquet had its reward.

Cook cut a short ball that bounced a little straight to David Warner at point to fall for 72, and when Pietersen survived an adrenalised battle with Mitchell Johnson only to slap a mistimed pull off Peter Siddle to the resting bowler at mid-on for 19, Australia celebrated as if the Ashes were won.

It was the 10th time Siddle has dismissed Pietersen in Tests, and a sad waste of all that diligence against the higher-profile members of the attack.

England had earlier cleaned up the remaining four Australian wickets for the addition of just 59 runs to their overnight 326, with Stuart Broad removing Johnson for 39 and James Anderson having centurion Steve Smith caught behind in the first 20 minutes.

Anderson also had Harris caught in the slips before the last-wicket pair of Nathan Lyon and Siddle added a frustrating 31.

Cook and Michael Carberry then looked relatively serene as they compiled only England's second half-century opening partnership in 15 innings against Australia this calendar year.

Smith missed the sharpest of chances full length to his left at third slip off Carberry but the pair continued to flourish after lunch until Carberry played on to Harris for 43, pulling away his bat too late after initially poking at a ball wide of off stump.

It brought back memories of three years ago, when England progressed to 78-0 in their first innings here before Johnson and Harris ran through the team to leave them 187 all out.

Instead it was the less heralded members of the attack who did the damage this time, and while England remain in the game with Ian Bell (nine not out) and Ben Stokes (14 not out) at the crease, the momentum and smart money remains with their rejuvenated opponents.