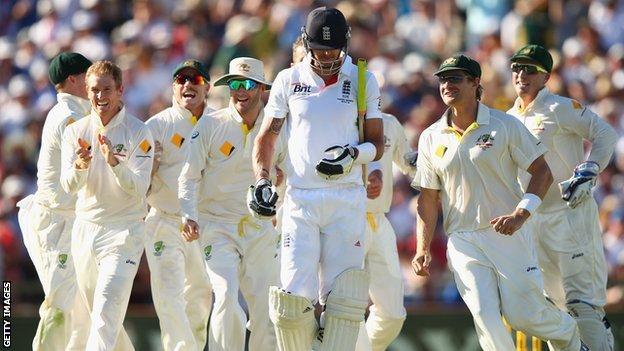 Cook and Pietersen dig in, the main men delivering? 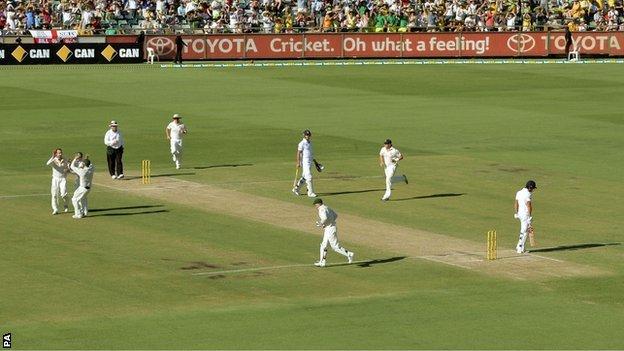 To say it was going well for England might be something of a stretch, but the tourists were at least fighting, showing some promise.

At 136-2, Alastair Cook was well set on 72 and Kevin Pietersen had begun his innings in the sort of circumspect fashion that suggested he was in for the long haul.

In the space of 20 deliveries, hope was eroded and Australia were back in control.

First Cook played a loose cut to slash off-spinner Nathan Lyon to point, then Pietersen inexplicably swatted a front-foot pull off Peter Siddle to mid on, where Mitchell Johnson took an athletic catch above his head.

The series in microcosm? England masters of their own downfall, Australia grasping every chance that comes their way.

The DRS controversies that dominated England's 3-0 victory in the summer had largely been absent from this series. Until today.

Joe Root, in form and eager to kick on from his second innings 87 in Adelaide, was given out caught behind by umpire Marais Erasmus off the bowling of Shane Watson.

Root immediately sent for a review, which only added to the uncertainty over whether he had actually hit the ball. There was no mark on Hot Spot and although the real-time Snickometer registered a sound, it appeared to be after the ball had passed the bat.

Nonetheless, third umpire Tony Hill believed he did not see enough evidence to overturn the on-field decision and a livid Root had to go.

England batsman Michael Carberry: "Unfortunately, we weren't able to build that really big partnership. But from what's happened so far in innings before in this series, it's a massive stepping stone in the right direction."

Australia bowling coach Craig McDermott: "Those two wickets in that last session were very crucial and the last three and a half hours of bowling and fielding were superb."

Former England batsman Geoffrey Boycott, before Pietersen was dismissed: "If I was batting with KP, I would tell him to engage his brain before he plays a shot. Mitchell Johnson probably only has one more over so just burn him out. You have almost won the battle. Don't give it away now."

Boycott after Pietersen was dismissed: "Australia know what to do to keep Kevin bogged down. They just knew that eventually the dam would break. He's played some wonderful innings but this is not his forte. The likes of Cook and Bell have to talk to him and tell him to keep playing in this sensible vein."

Former England captain Michael Vaughan: "If England can get to 330, they will be closer than they have been in either of the first two Tests and still in with a chance. They really don't want to be chasing too many on this pitch with those cracks opening up."

Former England batsman Ed Smith: "Michael Carberry's game and ability is well suited to Test cricket - he is very compact and balanced. The one area where he has made a few errors is in his shot selection, but he can tighten that up. Don't rule him out of a long-term future in the England team just because he is 33. Look at Brad Haddin, he is 36 and playing as well as ever."

England women's all-rounder Danielle Wyatt: Just seen Root's dismissal. Can somebody explain how he was given out please?