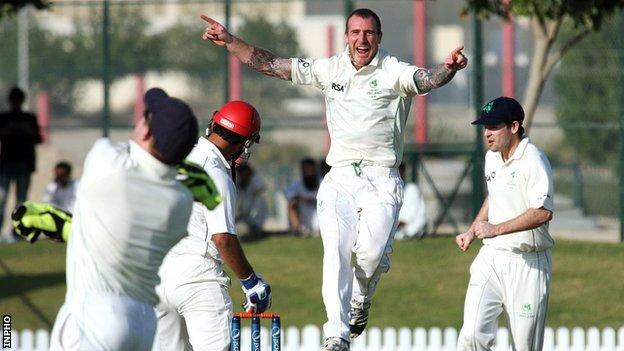 Ireland won the Intercontinental Cup for the fourth time by completing a 122-run victory over Afghanistan on the fourth day of the final in Dubai.

Afghanistan were 224 all out in their second innings, with John Mooney taking 5-36 to end the match with 10-81.

Afghanistan dominated the morning session on Friday as they survived 34 overs without losing a wicket.

But they lost their sixth wicket with the score on 199 and Mooney took the final four wickets in quick succession.

Chasing a target of 347, Afghanistan began the fourth day needing a further 211 to win, with just five second-innings wickets left.

That target began to look vaguely possible as the first two hours of play saw the Afghans progress to 189-5 thanks to some patient batting by Rahmat Shah and Mohammad Nabi.

The new ball was taken shortly after lunch and after Max Sorensen had Nabi out lbw for 49, man-of-the-match Mooney produced a fine display to mop up the tail and secure his second five-wicket haul of the match and Ireland's third trophy of 2013.

Ireland had struggled to 187 all out on the first day of the match on Tuesday, but their opponents could only manage 182 in reply.

Former skipper Trent Johnston hit 31 in his last innings for Ireland at the ICC Academy.

"It is a fantastic feeling. We had obviously set out to do that," said delighted Ireland skipper William Porterfield.

"I think it is all because of the hard work we put in. We are a pretty hard working bunch any time we come away on tour.

"Over the last four or five years, we have become a lot more professional outfit both on and off the pitch. I think that has helped us massively with our cricket."

Porterfield paid tribute to Johnston, who is also a member of the ICC Cricket Committee. "A big part of us over the last 10 years has been Trent Johnston. He has been a massive figure since a lot of this team started playing.

"I made my debut under Trent. I have played some 160-170 times with him. There are a lot of young lads who have learnt a lot from him and there are a lot of lads now chomping at the bit to take his place.

"That's the fitting way for Trent to sign off and pick up that trophy."