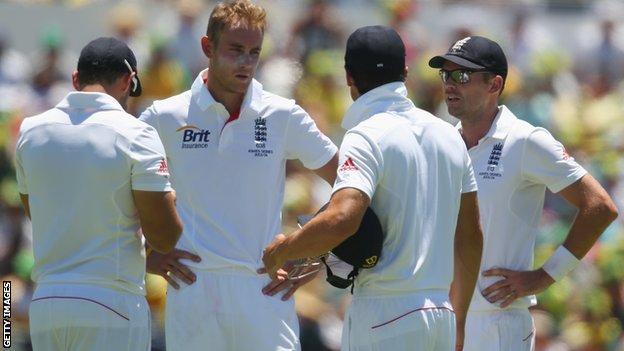 In some ways, the first day of the third Ashes Test in Perth mirrored the opening exchanges of the previous two matches in Brisbane and Adelaide.

In Brisbane, England reduced Australia to 132-6 only for the hosts to recover to 295 all out. In Adelaide, they were 174-4 but went on to declare at 570-9. The tourists suffered heavy defeats in both games.

Here, in a game they cannot afford to lose in their bid to defend the Ashes, England had another huge opportunity.

In good batting conditions, some loose Australia shots saw the home side slip to 143-5. It was a real opening for England and, by the way they were jumping about, they knew it.

But, again, Alastair Cook's side could not finish the job.

That was mostly down to the 124-run stand between Steve Smith and Brad Haddin, which turned the momentum.

Smith made his second Test century, but this one matters so much more than the one he scored in the dead rubber at The Oval in August.

He is not the most talented batsman but he worked incredibly hard and deserves huge credit.

As for Haddin, this is the third time in the series that he has rescued Australia. There is a link between Haddin's performances and England not grasping the chances that are coming their way - he is becoming a real thorn in the side.

In truth, though, England may have missed a trick when Haddin first arrived at the crease. The wicketkeeper is a compulsive hooker, who could have been given more of a working over.

He got hit and almost skied a catch to long leg, but England abandoned that plan quite early, perhaps in a determination not to bowl too short.

But, for all the praise that goes to Australia's sixth-wicket pair, we must acknowledge the lack of firepower in England's attack, which is a growing concern.

"At five down, England were not good enough to grasp the opportunity. The concern for England is that James Anderson is not doing anything with the ball, he was straight up and down. Graeme Swann has been a match winner for England and controlled matches when he isn't taking wickets. He could do neither today - he was gifted his two wickets."

At the start of the series, there was so much talk about the giant pace bowlers in the tourists' squad, but none of Steven Finn, Boyd Rankin and Chris Tremlett are in a position to be selected.

These are three bowlers that England would have looked to tear in, generate pace and find bounce, but they are simply not in the form to be picked.

Instead, England had to go with Tim Bresnan, a third seamer chosen to do a holding job, with all-rounder Ben Stokes taking some of the burden from James Anderson and Stuart Broad in incredibly hot conditions.

The heat was a factor, but England teams of the recent past would have been able to finish Australia off. This one was unable to.

Now, contrast that with the Mitchell Johnson-led Australia, who you would expect to bowl England out for 190 if they take the first five wickets for 140.

And, on a pitch that will get quicker over the next day or two, facing Johnson will not be a pleasant prospect for England's batsmen.

First, with a newish ball and fresher legs, they have to wrap up an Australia innings that currently looks well on course for 400, and then they have to back up their talking by performing with the bat.

Australia's score is clearly relevant, but of much more importance is that way that England perform.

Now is the time to perform. Fail, and Australia will snatch the Ashes from England's flimsy grip.