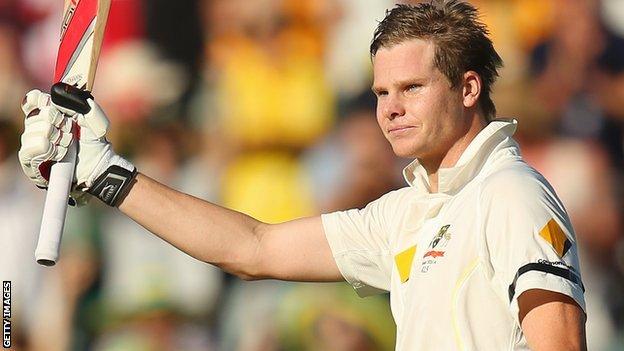 A century from Steve Smith took the first day of the third Test away from England as the tourists were once again unable to capitalise on a promising position.

Australia had been 143-5 just after lunch as their top order gave their wickets away cheaply, but a sixth-wicket partnership of 124 between Smith and Brad Haddin (55) took them to safety before late muscular hitting from Mitchell Johnson extended their advantage.

Smith made 103 not out with 15 boundaries and Johnson an unbeaten 39 as the home side closed on 326-6, the highest first-day total at this ground in Ashes history.

With temperatures at 39 C for much of Friday, it was another punishing day for England's attack at a ground where they have only won one Test.

And with Alastair Cook's men not having scored 400 in 20 Test innings, it leaves Australia in a strong position as they look to make it three victories on the bounce and win back the Ashes for the first time in seven years with two matches still to play.

On a track that looked designed to break bowlers, Michael Clarke had won the toss and been able to bat first for the third Test in a row.

Yet the breakthrough came early when an electric piece of fielding from James Anderson at mid-on saw Chris Rogers run out for 11 with a direct hit.

Eight boundaries came off the first eight overs as David Warner and Shane Watson attacked hard before Watson, in characteristic fashion, chased a wide one from Broad to be taken by Graeme Swann at second slip for 18.

Clarke continued to be aggressive, and as the 50 partnership came up in just 63 balls, Warner went to his own half century off 57 balls with seven fours and a six.

If it felt reckless even on this wicket, the score racing past 100 in fewer than 22 overs, Clarke and Warner then fell to needless shots to gift England the initiative.

In the penultimate over before lunch, Swann's first of the match, Clarke came down the pitch and clipped the ball straight to Cook at short midwicket for 24.

Warner then cut a short one from the same bowler to Michael Carberry at backward point for 60, and when the unhappy-looking George Bailey top-edged a hook off Broad to Pietersen at deep square leg for just seven, Australia had slumped to 143-5.

Just as on day one in Brisbane and Adelaide England had a crowbar in the door. But just as in those first two Tests, Australia then slammed it shut as Smith and Haddin added 66 runs in the 14 overs before tea, Ben Stokes coming in for punishment as he dropped short too often.

The shot-making continued in the evening session. Smith in particular used his feet well to Swann, and the 100 partnership came up with a delightful skip and cover drive for four.

The heat was unrelenting, Tim Bresnan in particular struggling to keep his pace up after being recalled in place of Monty Panesar.

Haddin went to his 50 with a straight six off the seamer, and so comfortable did the pair look that it was a surprise when he mis-hit a pull off Stokes to Anderson at midwicket to end another essential innings on 55.

The work had been done. That partnership had taken the day away from England, and as Smith flourished in the company of Johnson so one sensed the match and series was slipping away too.

Smith went to his second Test century and his first on home soil with a pull off Stokes for four, the 13th of his innings to go with the two sixes, and celebrated with a leap and a grin.

After a poor series so far his innings meant that Australians have now made five individual scores of 100 or more in this series to England's none.

Johnson then took over the charge as the second new ball came and went without any further breakthrough.

And by the end England were looking horribly short of ideas as their troubled tour went through another disheartening day.