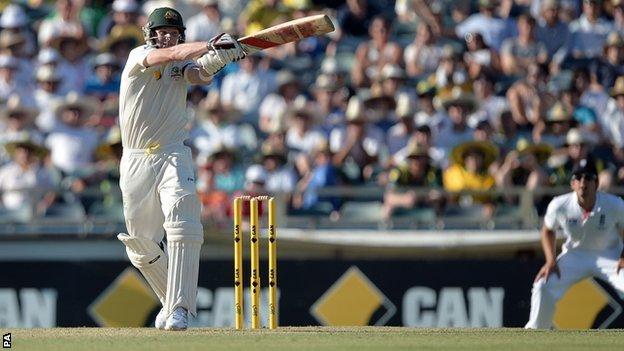 One of two halves, of two captains to 100 Tests.

Australia bat on a belter, but gift wickets to England.

Full day one report from Perth

On a flat pitch, Australia gave England the upper hand with some England-esque wasteful batting.

A brilliant James Anderson throw ran out Chris Rogers with a direct hit, before Stuart Broad and Graeme Swann got to work.

Broad drew a limp edge from Shane Watson and peppered George Bailey into surrendering on the hook.

In between, Swann did for Michael Clarke and persuaded David Warner to cut to point for 60.

With the hosts 143-5, England had the opportunity to take control. 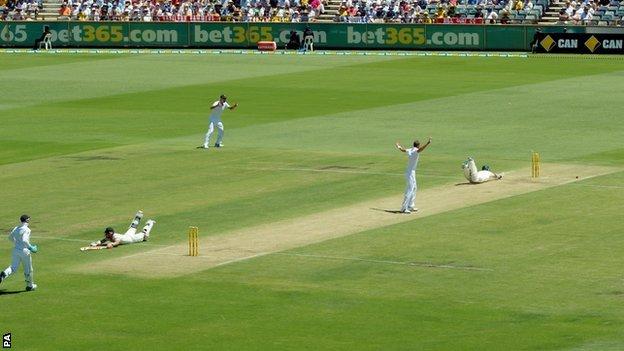 Having made only 60 runs in the first two Tests, Steve Smith was told he was "one game away" from being dropped by England wicketkeeper Matt Prior as he arrived at the crease in Perth.

It is a piece of sledging that backfired.

Smith took 16 balls to get off the mark, but when he did, he lofted Swann down the ground for six.

Playing the short ball with more assurance than his team-mates, the punchy Smith combined with the omnipresent Brad Haddin to reverse the tide.

He moved to a second Test hundred by hooking Ben Stokes for four, and remains 103 not out overnight. 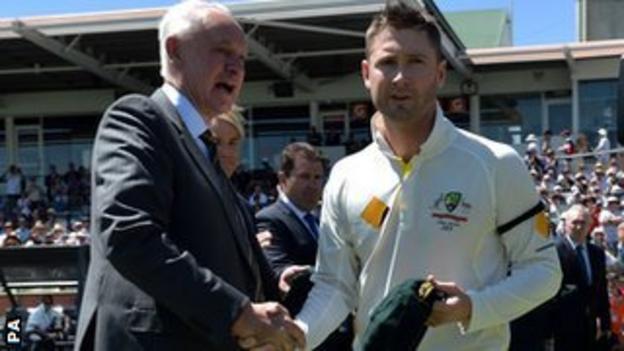 It was a double cause for celebration for Australia captain Clarke, who was named as the ICC Cricketer of the Year on the day he won his 100th Test cap.

Before the start of play, the 32-year-old was given a guard of honour by six of the other 11 Australians to play 100 Tests, including Glenn McGrath, Shane Warne, Mark Taylor and Allan Border.

Winning the toss on a flat pitch was also a boon for the skipper, but his day came crashing down in Swann's first over of the day.

From only the second ball, Clarke skipped down the pitch, but could only flick to opposite number Alastair Cook at short mid-wicket to depart for 24.

Australia batsman Steve Smith: "I felt pretty good today, from ball one. I left the short balls which were a bit high and the ones which were a little lower I got hold of. I was pretty happy with my patience and the way I played.

"We're in a good position and hopefully we can push on in the morning. Nobody said anything to me in the field today, but I guess that happens when you are scoring runs."

"We assess selection all the time. We make mistakes, and we might have made a mistake in this game. We picked a side that we thought would get 20 wickets and that still could happen."

Former England batsman Geoffrey Boycott: "At five down, England were not good enough to grasp the opportunity. The concern for England is that James Anderson is not doing anything with the ball, he was straight up and down. Graeme Swann has been a matchwinner for England and controlled matches when he isn't taking wickets. He could do neither today - he was gifted his two wickets."

Former England captain Michael Vaughan: "Australia's tail fancies getting runs against England's attack, yet England's lower order just cannot handle the pace of the Australian attack. England's batsmen need to score 80% or more of their runs for the team to have any chance."

Former Australia fast bowler Glenn McGrath: "All fast bowlers love the Waca, but I don't think the pitch is as quick today - it will be days two, three and four when it's at its fastest."

England batsman James Taylor: Serious 100 from Steve Smith when his team were in trouble and he was under pressure!

Could you have ever imagined that you would see this?

But, in a picture tweeted by TMS, Boycott has donned the famous baggy green in Perth. 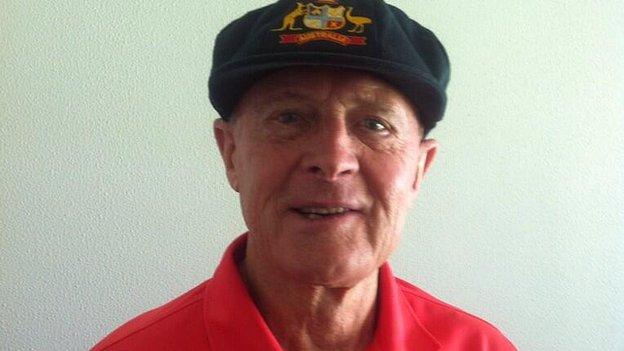