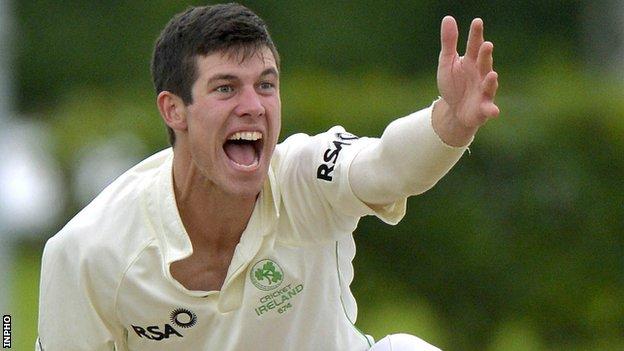 Ireland look set for victory in the Intercontinental Cup final as Afghanistan need another 211 with just five second-innings wickets left.

The Irish, three-times winners of the competition, set the cup holders a target of 347 before Somerset spinner George Dockrell took three wickets.

Earlier Ireland had scored 341 in their second innings with Niall O'Brien top scoring on 87.

There are two days left in the final of the ICC competition which gives associate members the chance to play first-class cricket.

However, the odds would appear to be on Ireland mopping up the remaining five Afghan wickets on Friday.

Ireland, who had led by five runs after the first innings, had been on 159-2 overnight.

When play resumed at the ICC Academy on Thursday, they quickly lost Ed Joyce, who had added just a four when an inswinger from Dawlat Dawlatzai rattled the stumps.

Wicketkeeper Niall O'Brien, and Ireland's leading scorer in the competition Andrew White, took the score on to 244-3, but wickets then started to tumble.

White (32) was trapped lbw by Rahmat Shah, John Anderson (2) edged the same bowler to the slips and Niall O'Brien's back-foot cover drive was caught by Afsar Zazai off Mirwais Ashraf.

Ireland were suddenly 258-6 and that became 274-7 when John Mooney's inside edge saw him caught out for three.

Kevin O'Brien was lbw to Mohammad Nabi three short of his half century while all-rounder Johnston was the last man out after scoring 31.

Afghanistan were left facing a big target of 347 to win and their chances of reaching it looked increasingly unlikely as the Irish bowlers claimed early wickets.

Shabir Noori dispatched two boundaries in the opening over but was then out lbw to Johnston in only the fifth ball of the innings.

Mooney then picked up the wicket of Nawroz Mangel when the ball nipped back and wicketkeeper O'Brien did superbly to catch the inside edge down the leg side.

Dockrell had Mohammad Shahzad caught and bowled and the 21-year-old spinner then picked up two more wickets in the first over after the third session drinks interval.

A rash charge down the wicket saw Asghar Stanikzai bowled and two deliveries later Dockrell had Afsar Zazai plumb in front to leave Afghanistan floundering on 87-5.

Rahmat Shah and Mohammad Nabi took the score on to 136 at the close with Dockrell ending the day on three wickets for 28 runs off 16 overs.