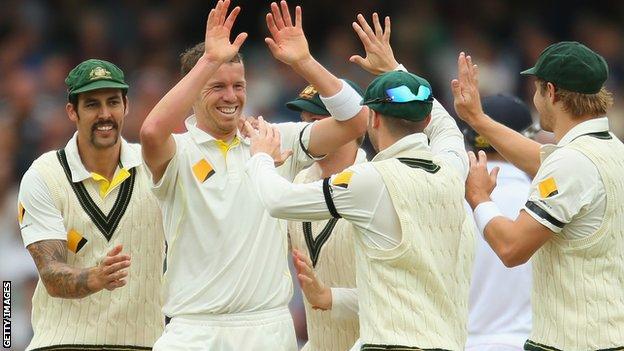 Australia will be the side under pressure in the third Ashes Test, says their former keeper Adam Gilchrist.

The hosts, who lead England 2-0, will clinch the series if they win in Perth.

Australia have struggled in recent years and Gilchrist, 42, says their lack of success could be a factor in the third Test, which starts on Friday.

"Most of this group of players have not been in this scenario in their careers, so there will be a challenge for them to maintain that standard," he said.

England have won the last three Ashes series, taking the most recent meeting between the two sides 3-0 at home this year.

And Gilchrist, considered to be one of the finest wicketkeeper-batsmen in the history of the game, added: "It's a challenge for the Australian team, they are so close. That might be something for England to draw on."

The series, which has seen Australia comprehensively win both the first and second Tests, has featured several instances of sledging between the two sides.

"I have not seen anything that has been out of line or different to anything historically over the course of Test cricket," said Gilchrist, who scored over 5,000 runs at an average of 47.60 in addition to his 416 Test victims.

"If anything, it is probably a sign of respect. It's because they both feel a threat to each other."

Temperatures in the capital of Western Australia could be in excess of 30C (86F) during the third Test, similar to conditions that Gilchrist felt helped him hit a hundred off 57 deliveries against England in 2006 following centuries from Clarke and Mike Hussey.

"The heat does come into the game here. In 2006 I was the beneficiary of a 40-degree day, and two batsmen prior to me scoring hundreds. By the time I got hold of that England attack, they were pretty cooked, so that comes into it," he said.

"The toss will be important, and it could be mid-to-high 30s during the game, so players will need to be aware of that. It can be difficult, particularly for touring teams who are not used to those conditions."