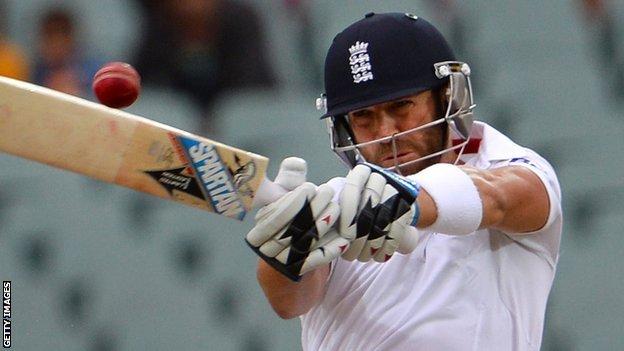 Wicketkeeper Matt Prior says England must "come out fighting" and not "sulk, moan or whinge" if they are to turn around the Ashes from 2-0 down.

The third Test starts on Friday in Perth where England will be aiming to win for only the second time, and first in 35 years, to start their comeback.

Asked if England can still win the Ashes, Prior said: "Absolutely, 100%.

"One thing I do know about this team is that when we get to this place we come out fighting. You have no option."

England would become only the second team - Australia managed it in 1936-37 - to recover from losing the first two Ashes Tests and go on to win the series.

"You can sit there and sulk, moan, whinge and make excuses - but you will just get beaten," said Prior. "You have to get rid of all that and fight.

"People have written us off. We're at Perth. We haven't won here for however many years.

"But quite frankly that excites me. Records are there to be broken.

"There is a huge amount of hunger in this dressing room to turn this around."

Temperatures in Perth have recently been on the rise and are set to hit a maximum just in time for England to take on Australia in the third Test. It's expected to be dry, sunny and very hot throughout the test with temperatures expected to hit a sweltering 36-38 degrees Celsius during Friday to Monday. By Tuesday, a cooler prospect of 30 degrees but more humid with the wind switching to a south-westerly.

Keep up-to-date with the Perth forecast

England captain Alastair Cook said his players had to look deep into their "inner souls" after the 218-run defeat in Adelaide followed a 381-run loss in the opener in Brisbane.

Coach Andy Flower has also promised changes to the England side for the game in Perth.

Prior said it was time for the tourists to learn from their mistakes and show their battling qualities.

"Sometimes you have to look at yourself straight in the mirror and know where you're at," he added.

"If you don't do that you will do the same things and get the same results, and we can't afford to do that.

"We have experience in the dressing room and guys who have had quite a lot of ups and a few downs as well, and we have to learn from all of those mistakes.

"This is a time for brutal honesty and fronting up."

One of England's main problems has been their batting - they have only passed 200 once in four innings so far.

They have struggled against the short ball and, in particular, the bowling of left-arm paceman Mitchell Johnson, who has taken 17 wickets in the two opening Tests.

Johnson plans to add to England's misery in Perth, which is his home ground.

"If you can bowl a ball at someone's grill, I don't care who you are you're going to feel intimidated - and especially on a wicket like Perth," he said.

"I like the idea that being a fast bowler you can be aggressive and intimidate."