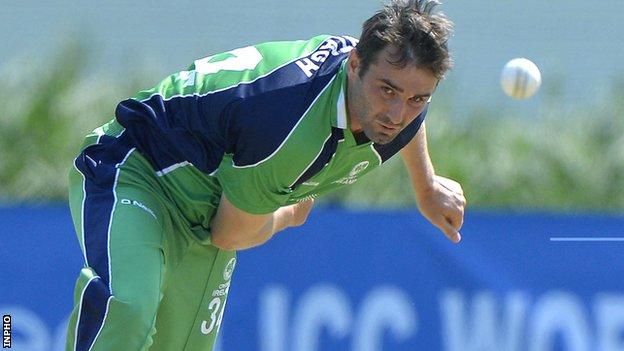 Ireland bowler Tim Murtagh has withdrawn from the squad for the Intercontinental Cup final against Afghanistan due to personal reasons.

The Middlesex player is returning to his family in London, while Ireland will not bring in a replacement.

The Irish will hope to give former skipper Trent Johnston, who will retire after the five-day game in Dubai, a winning send-off.

Ireland, as group winners, need only a draw to regain the trophy.

Johnston, the competition's top wicket taker with 88, will play his 197th match for Ireland.

With the 20 and 50-over World Cup qualifying trophies already in the bag, Ireland are aiming to end a successful 2013 with more silverware.

The match starts on Tuesday at the ICC Academy.

The Intercontinental Cup is a competition for Associate Members of the ICC and Afghanistan are the current holders, with Ireland winning the three events before that.

Ireland coach Phil Simmons is in no doubt his players are hungry for more success.

"Their appetite for trophies and World Cups shows no sign of waning," he said.

"This is the one trophy that is currently missing from our cabinet at the moment, and the squad is keen to rectify that."

Ireland, under Simmons and his predecessor Adi Birrell, have dominated Associate cricket since 2005, winning no fewer than eight global competitions in that period.

The Intercontinental Cup was the first major trophy Simmons won as Ireland coach, as they completed an emphatic innings win against Canada in 2007.

"That win was special for me as it came at Grace Road, where I had such happy memories, including winning the County Championship.

"We defended it against Namibia the next time, but a combination of the weather and a loss to Afghanistan in Sri Lanka meant we missed out the last time.

"The guys want TJ to go out on a high, as we all know how much this final means to him."

Andrew White of Instonians is Ireland's leading scorer in Intercontinental Cup history - his 1502 runs at 60.08 putting him above Andre Botha (1352), Niall O'Brien (1155) and skipper William Porterfield (1122).