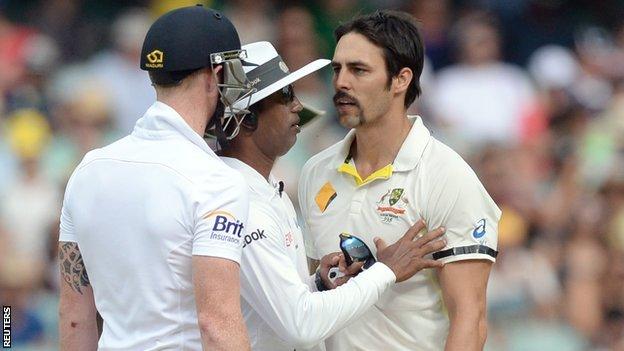 England all-rounder Ben Stokes and Australia bowler Mitchell Johnson have been found not guilty of inappropriate and deliberate physical contact.

The pair barged shoulders as Stokes ran a single before being separated by umpire Kumar Dharmasena on the fourth evening of the second Test in Adelaide.

Both pleaded not guilty and had separate hearings.

"I am satisfied that their physical contact was not deliberate," said match referee Jeff Crowe.

"Both players, however, could have done more to avoid each other and they have been so counselled.

Australia completed a 218-run win on the fifth morning in Adelaide to take a 2-0 series lead.

Before the match, England captain Alastair Cook said the hostility during the bad-tempered series opener in Brisbane went "over the top".

Though the animosity between the sides was less evident in Adelaide, the Stokes-Johnson confrontation was followed by verbal exchanges between the Aussie pacer and England pair Matt Prior and Stuart Broad, which continued as the teams left the field on the fourth evening.

"Some people will say these verbal exchanges provide great theatre, but it is not the way Test cricket should be played," said BBC cricket correspondent Jonathan Agnew.

"The umpires need to be much stronger to stamp it out."