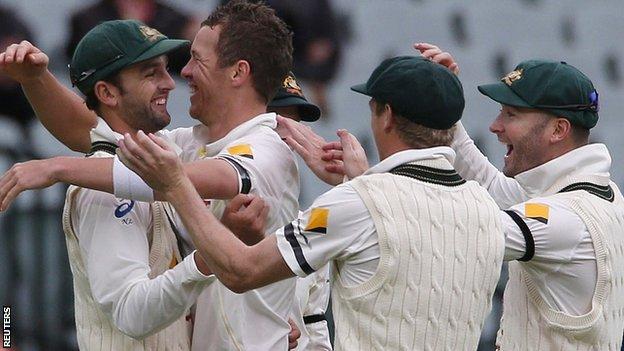 Australia captain Michael Clarke says his side's 2-0 lead in the Ashes is not "a fluke" and the result of hard work.

Clarke's side were beaten 3-0 in England last summer, but have taken control of the series down under with huge wins in Brisbane and Adelaide.

"In England we were closer than the score showed," said Clarke, whose side completed a 218-run win on the fifth morning of the second Test.

"Michael Clarke will be absolutely cock-a-hoop. After the very first day of the series when he was out for nought, Alastair Cook had no problems and Clarke was under the cosh. But two hundreds later, and two victories later, the boot is on the other foot. Clarke has never been universally popular in Australia, but they all love him now. Australia are on the crest of a wave, it's going to take a lot to knock them off, and Perth is probably not the place to do it."

"This isn't a fluke, this is reward for hard work over a long period of time."

Australia's win in Adelaide followed the 381-run first Test success and leaves them on the brink of winning the Ashes for the first time since 2006-07.

Clarke's side can end a run of three successive Ashes series defeats with victory in the the third Test, which begins on Friday at the Waca in Perth, a ground where England have only ever won one Test.

"I can't answer why we've now won so convincingly," continued 32-year-old Clarke, whose team were winless in nine Tests before the start of this series.

"It's obviously exciting we're going to a ground we're comfortable at in Perth, but I'm most concerned about continuing the same brand of cricket.

"England aren't throwing in the towel. They're a tough team and will continue to be competitive. We have to be at our best to keep them down."

Australia's success has been largely built on the threat of pace bowler Mitchell Johnson, who took 7-40 in the first innings in Adelaide as England were blown away for 172.

Bowling at speeds as high as 94mph, Johnson has taken a total of 17 wickets in the series at an average of 12.70 and has been named man of the match in each of the first two Tests.

"I'm bowling the way I want to bowl," said the 32-year-old left-armer. "The intimidation factor is a bonus because it wasn't there in the last few Ashes series. I've enjoyed it."

"Australia will probably go with the same team on Friday. The only thing they might change is if they get to Perth and decide they don't need the spinner and England might have four seamers to face. They've played a great brand of cricket, and they've got a firecracker in Mitchell Johnson who's put fear into the England line-up."

Australia coach Darren Lehmann, who took charge at the start of the series in England, said: "Mitch has been impressive. He's confident.

Australia lost the first two Tests in the previous series in England but were hampered by the weather is the drawn third and fifth matches, and were in contention in the fourth at Chester-le-Street before a Stuart Broad spell took England to victory.

"I think we started the turn around after the second Test at Lord's," added Lehmann. "The consistency has now been there in these first two Tests.

"It helps when you win, because at the end if the day in England we lost the games. Once you start to win it makes it easier for the guys to know what we're doing and where we're going."

Australia have named an unchanged squad for the third Test, with all-rounder James Faulkner added to the side that won in Adelaide.

•England have not passed 400 in their last 20 Test innings

•Matt Prior's half century was his first in 17 innings