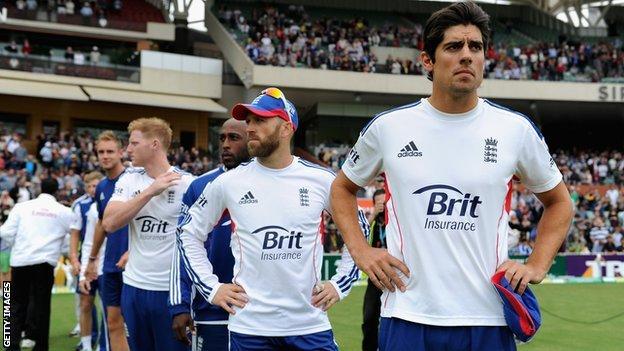 England captain Alastair Cook insists his battered side can fight their way back into the Ashes despite suffering a second consecutive thrashing to go 2-0 down in the five-Test series.

Australia won the second Test by 218 runs after taking England's final four wickets for just 65 within the first hour of the fifth day in Adelaide.

But Cook said: "The Ashes are not gone.

"If we believe they're gone they might as well be. We have to look deep into our inner souls to drag something out."

"We have to dust ourselves off, work really hard and believe it can be turned around. It's hurting like hell, but the only ones who can do anything about it is us."

With the third Test starting on Friday at the Waca in Perth, a ground where England have won only once in Ashes history, Australia are red-hot favourites to seize back the urn with Tests in Melbourne and Sydney still to come.

But he is not the only senior player struggling, with England having failed to pass 400 in their past 20 Test innings.

Cook admitted: "I don't know what has gone wrong in the past couple of games. We are very good players, but you can only say that for so long. We have to deliver.

"What has happened at Perth before is a total irrelevance. We have to go there as this side, in 2013, and do something special. Good players turn it around. That's what we must do.

"We are dropping catches and not scoring enough runs. I have to get more runs and so do others.

"Shot selection and execution is a concern. Some poor shots have been played in this Test."

England were bowled out for 312 on the final morning at the Adelaide Oval, meaning they have lost successive Tests by a margin of more than 200 runs for only the second time in their history.

So abject have their performances been in the series so far that Test Match Special pundit and former England captain Michael Vaughan has predicted there might yet be a repeat of the infamous 5-0 whitewash of 2006-07.

"I see a few technical flaws but it's the thinking that's the problem. If they're not thinking correctly, this has 5-0 written all over it," said Vaughan.

"I don't look at this batting line-up and think 'there's 450 in there', and that's what they're going to require to put this Australian team under pressure.

"England played all right in the second innings here, but they only scored 312, and that's not going to win you Test matches in Australia. If they'd scored that in the first innings, they'd have still lost the match.

"As I said the other day, it will be 5-0 unless this dressing-room twists the mentality around."

"There are some scrambled minds, that's what worries me as an England supporter, and I don't see anybody learning from it," he said.