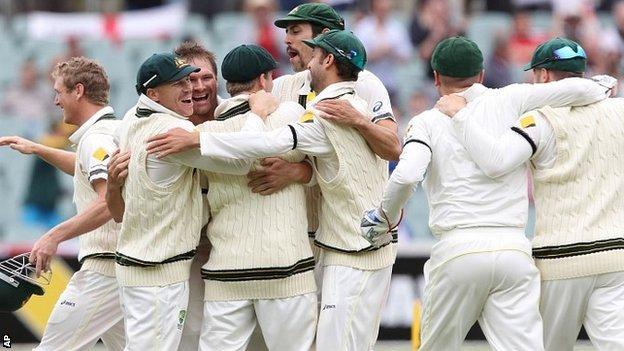 Australia secured a 2-0 lead in the Ashes series after brushing away the last feeble vestiges of English resistance to win the second Test by a thumping 218 runs.

Needing to bat all day to save the Test, England instead could not bat out the first hour as they lost their final four wickets for 65 in another unnecessary flurry of attacking shots.

Only once before have England lost successive Tests by a margin of more than 200 runs, but after the 381-run thrashing in Brisbane they are now in dire danger of ceding the Ashes to their rampant opponents.

With the third Test in Perth starting on Friday on a ground where Australia have won the last six Tests between the two, England need a turnaround of unprecedented proportions to keep the series alive.

All 10 of their second innings wickets here in Adelaide went to deliveries that would not have hit the stumps, just one of many chastening statistics in a contest that has thus far been entirely one-sided.

For Australia, without a win in their last nine Tests before this series and beaten in seven of them, it is a stunning turnaround.

"The Australians have played a great brand of cricket. If England are getting out playing the pull shot on a slow wicket, what's it going to be like at the Waca? I see a few technical flaws with England, but it's in their minds - unless they twist the mentality round, it's going to be 5-0."

Coach Darren Lehmann and captain Michael Clarke can take great credit for instilling belief in a side that looked bereft once they went 2-0 down after two matches in the corresponding series in England in the summer.

And while man-of-the-match Mitchell Johnson went wicketless on the final morning, his 17 wickets at an average of just 12.7 runs apiece have proved critical against an England side that is likely to see several changes for that third Test at the Waca.

There had been heavy rain in Adelaide in the morning, leading to hopes from the travelling support of an unmerited escape after Australia's domination of the first four days.

But the rain cleared quickly, delaying the start by just 10 minutes.

Further showers were forecast but England took the weather out of the equation with a succession of questionable shots that began in the very first over.

Stuart Broad hooked the second ball he faced from Peter Siddle for six but then tried the same off the next ball to be caught at deep square leg.

Graeme Swann followed with a tame edge to second slip off Ryan Harris as any delusional thoughts of a heroic rearguard action rapidly went up in smoke.

Matt Prior threw caution to the wind with some heavy hitting to bring up his first Test 50 in 17 innings after just four runs in his last three.

But when he top-edged a pull of his own from Siddle to Harris at long leg to fall for 69, even that brittle straw was snatched away.

And when Monty Panesar pushed Harris to Chris Rogers at short cover having failed to trouble the scorers, Australia were celebrating their second decisive win in two weeks.