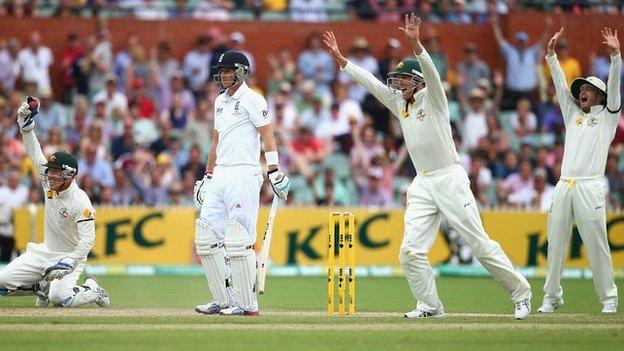 England's last four batsmen must survive the entire final day of the second Test to snatch an improbable draw as Australia close in on a 2-0 series lead.

The battered tourists will resume on 247-6, 284 runs adrift of what would be an unparalleled and utterly unrealistic win, without a single specialist batsman left.

Captain Alastair Cook, Michael Carberry and Ian Bell were all guilty of bad misjudgements as only Joe Root (87) and Kevin Pietersen (53) delayed what feels like an inevitable Australia win.

Matt Prior's unbeaten 31 and Stuart Broad's 22 not out at least ensured England did not suffer the embarrassment of defeat within four days.

But with the new ball just 10 overs old and the weather forecast favourable, they are likely to travel to Perth for Friday's third Test facing their biggest Ashes deficit in seven years.

Requiring a nominal 531 to win after Australia declared overnight, or to bat out two days for an unlikely draw, England got off to the most dispiriting of starts when Cook top-edged a reckless hook in Mitchell Johnson's first over of the day to be caught by Ryan Harris at long leg for just one.

It gave the captain his lowest match aggregate since the Sabina Park Test of 2009 and set the tone for too much of the batting that was to follow.

"It's the first time in the series that England have batted through a day, so that's a positive. Joe Root was excellent and showed composure and calmness. Kevin Pietersen played quite well, Michael Carberry was a little bit unfortunate, but Ian Bell will realise he's had a disaster after hitting a full toss from Steve Smith down mid-on's throat.

"We've seen lots of sledging with Broad and Johnson going at each other, but what's important is that England got blown away on the third day and there's no question that Australia will be going 2-0 up at some point tomorrow."

Carberry had looked comfortable for his 14 but then swatted a pull shot off Peter Siddle straight to Nathan Lyon on the deep square leg boundary.

Root and Pietersen then quietly compiled England's biggest partnership of the series as the pitch revealed its true, docile nature.

Root went to his fourth Test 50 with a two clipped through mid-wicket off Johnson, and Pietersen then tucked into a succession of full tosses and long hops from the occasional leg-spin of Steve Smith to go to his own half century midway through the afternoon session.

The partnership was up to 111 when Siddle brought one back in a fraction from the Cathedral End and Pietersen, caught between playing and leaving, instead deflected the ball onto his off bail.

The wicket meant Siddle - tucked in the shadows of Johnson and Harris for much of this series - has now dismissed Pietersen nine times in Test cricket, more than any other man.

With tea due, Bell then went in the worst possible manner, advancing to another full toss but smearing it into the hands of the diving Johnson at mid-on.

It left England 143-4, still 388 runs adrift and four sessions from safety. And while the skies above the Adelaide Oval were grey for much of the day, the showers that were around in south Australia bypassed the state capital.

Only in Root's patient, disciplined innings could anything be salvaged from the wreckage.

The 22-year-old played Johnson in admirable fashion, dropping his gloves to the short stuff and leaving well, and he was only 13 runs shy of his first Ashes century down under when an inside edge off Lyon rolled up his thigh pad and down into the reaching glove of Brad Haddin.

It was Haddin's 200th Test catch, and while Root will consider it an unfortunate end to an excellent innings, it surely guarantees he stays at number three for the next Test in Perth.

Ben Stokes had also stuck around doggedly despite several near-misses. But when his 90-ball stretch ended in Harris's second over with the new ball, edging to Michael Clarke at second slip for 28, it opened the door for Australia to polish the match off before Monday's fifth day.

Broad survived a dramatic working-over from Johnson and then clouted two fours before Prior did the same.

But to expect the England tail to keep this Australian attack at bay for 90 overs is to ignore both logic and precedent.

With England having lost their past six Tests at the Waca, the possibility of the Ashes returning to Australia within the next 10 days is now a very real one.