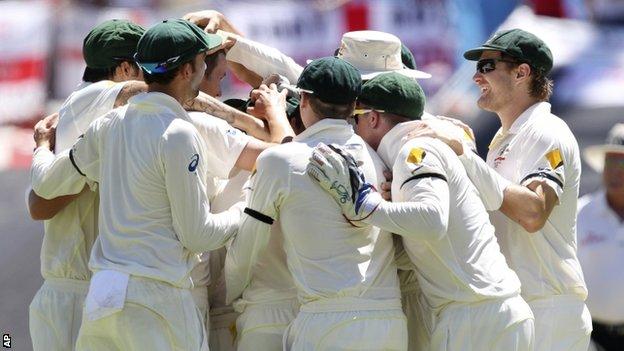 In a word - shambles. Poor shots before lunch then mayhem from Mitchell.

Five wickets to Johnson in the blink of an eye. England shot down for 172.

What, no follow-on? Clarke rubbing it in and resting his quicks.

Joe Root had batted with caution for 40 minutes on the third morning, but the introduction of off-spinner Nathan Lyon was like a red rag to a bull.

Immediately looking to attack, Root played a uncontrolled slow sweep and looped a simple catch to Chris Rogers on the leg side boundary.

"That's as stupid a shot as you could ever see," screamed Geoffrey Boycott on Test Match Special. "There are more brains in a chocolate mouse."

Kevin Pietersen and Michael Carberry fell to equally rash shots before lunch and England's collapse was well under way. 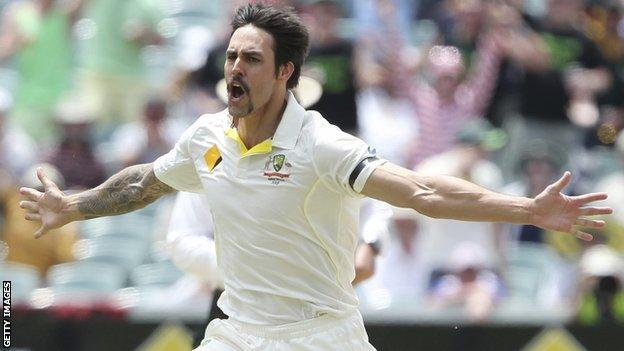 Countdown of the carnage

After the Slaughter at the Gabbatoir, this was the Adelaide Annihilation, and once again Johnson was the instigator.

His post-lunch spell, which included a triple-wicket maiden, will go down as one of the great modern displays of fast bowling. He took 5-12 in three overs, and 7-40 overall, to leave England in pieces on 135-9.

Here's how the drama unfolded: 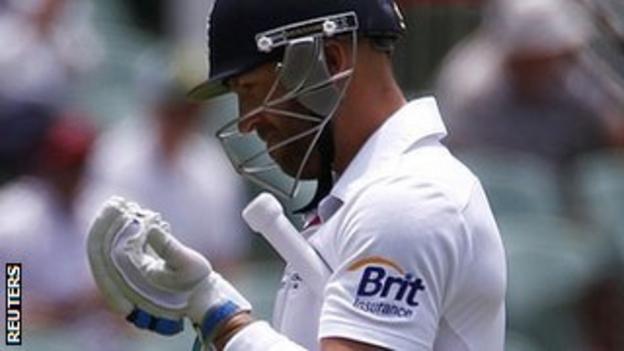 Matt Prior was named England cricketer of the Year in May following a 12-month period that featured a match-saving hundred in New Zealand and seven Test half-centuries.

I think it's fair to say he's unlikely to hold on to his award next year.

Since May, the England wicketkeeper-batsman averages 13.84 in nine Tests with a highest score of 47. His fourth-ball duck on Saturday was the fifth time he has failed to trouble the scorers in 16 innings.

England batsman Ian Bell, who scored 72 not out: "It's thoroughly disappointing. It is a very good wicket and we haven't given our bowlers any opportunity to get back in the game.

"The guys are hurting but I assure you they are doing everything to get this back. We've shown fight in the dressing-room in the past. We haven't done that so far this series but we have to put that right tomorrow and on the last day.

"Give Mitchell Johnson credit, but as an England team we haven't done anything close to what we are capable. Andy Flower and Cookie will be hurting and they will want all of us, from one to 11, to put this right. "

Mitchell Johnson: "It was emotional - coming back from injury I was told I'd never play international cricket again from a lot of people.

"To be able to back up after Brisbane was special. I've been called a one-game wonder to to be able to go out there and do it again was a great feeling."

Former England batsman Geoffrey Boycott: "England have had lots of praise for their performances when they've won Test matches and series, but they've got to accept criticism here. They've given the Ashes away. It's all over- they're not going to come back from here. Our batsmen don't look up for the fight."

BBC cricket correspondent Jonathan Agnew: "England will go 2-0 down here. How can they get back? Very difficult to see how. Out-gunned. Out-motivated." 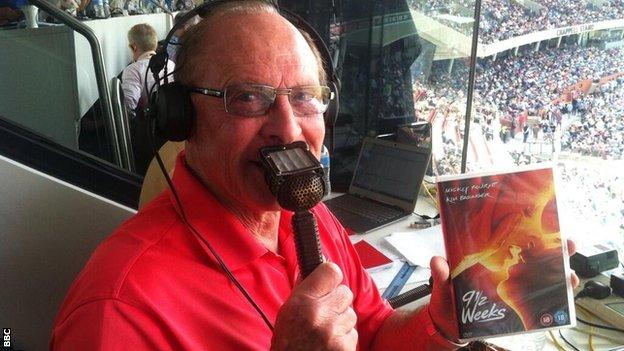 "It's quite a raunchy film, you know Geoffrey," warned Simon Mann.