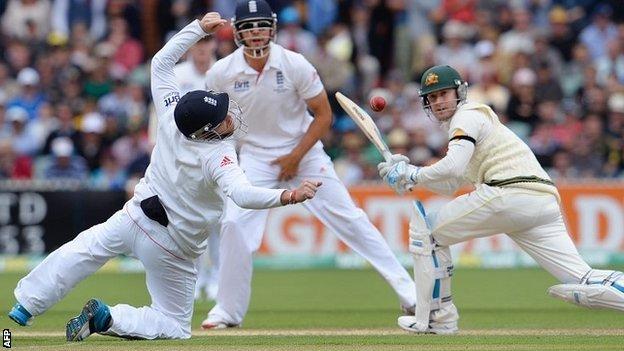 Clarke scored 148 in a partnership of 200 with Haddin as Australia declared on 570-9 before England reached 35-1 on day two of the second Test in Adelaide.

Asked if Clarke was peerless, Haddin, said: "I think so. You can definitely make a good argument for it.

"Since Michael's taken over as captain, his batting's gone to another level."

Clarke's second century in as many Tests, and his 26th in total, put Australia in a commanding position as they look to take a 2-0 lead over England in the best-of five match series.

"Once he gets past 20, he seems to go on and get some really big hundreds," added Haddin, who hit five sixes in his innings of 118 as he almost matched his average of 121 at Adelaide.

"His form over the last two years has been as good as anyone in the world. It's been good to watch."

Haddin, who survived being caught behind on 51 when Ben Stokes was pulled up for bowling a no-ball, reserved some praise for Mitchell Johnson.

"Clarke has now scored three hundreds in his last five Ashes Tests and, in the way he is playing, reminds me of Ricky Ponting's crusade to regain the urn in 2006-07.

"On that occasion, Ponting was smarting from losing the Ashes in England in 2005 and now Clarke is a similar Australia captain scorned, desperate to get the urn back and leading from the front."

The left-arm fast bowler produced a 94.5mph delivery that swung in the air and straightened off the pitch to bowl England captain Alastair Cook during a ferocious opening burst

"You could tell by his run-up that they were going to come out with some serious pace," said Haddin.

"He just looked smooth, he was coming into the crease and it looked like he was gliding in.

"I noticed up on the board he had the six fastest balls of the day after his first seven or so balls so it's always good having Mitch bowling that sort of pace.

"That ball that got Alastair Cook was a cracker. It swung late and was a very good delivery.

"My worst part of the week is the seven minutes having to face him in the nets. It's always good to have Mitch in your team."

Following Cook's dismissal, Michael Carberry and Joe Root showed some fight to steer England through to the close of day two without further damage.

Stokes, who removed Clarke and Peter Siddle for his first Test wickets, said the rest of the team can take inspiration from their efforts.

"The way they both stuck at it was brilliant to watch," said Stokes.

"We know we need to bat long and give them nothing on Saturday and hopefully the day after.

"We have a lot of talent in our batting line-up and we know we have the skills to do it."

Haddin said Australia were now in a position from which to dictate the match.

"There are still three days in the game, but we've put ourselves in a good position to drive the game where we need to," he said.

"It's up to us to bowl well and capitalise on a good score."