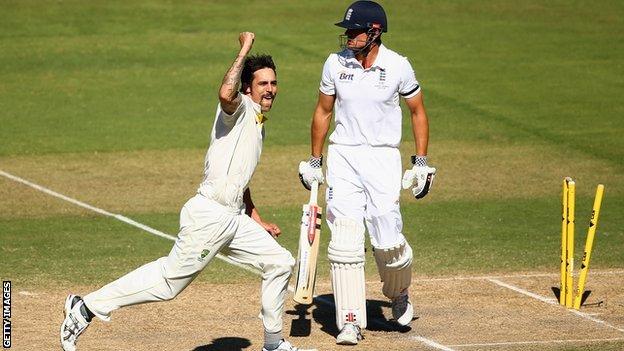 England's hopes of retaining the Ashes took another battering as Australia took complete control of the second Test on an utterly one-sided second day.

A brilliant 148 from Michael Clarke and belligerent 118 from Brad Haddin took the game away from England before lower order hitting from Ryan Harris (55 not out) allowed the captain to declare on an intimidating 570-9.

Given 21 overs to survive in the evening session, England lost Alastair Cook, clean-bowled by the runaway Mitchell Johnson for three before Michael Carberry and Joe Root clung on to leave them 35-1 at the close.

"The most disappointing part of the day is that we never looked as though we could hold them in check for any part of the day. Australia took the bowlers apart with consummate ease, none of them could stem the flow of runs.

"I know it's a flat pitch, but Michael Clarke is probably the best player of spin in the world, so it was money for old rope for him, Haddin was punishing us at will, and Swann looks nothing like the world-class bowler that's got 250 Test wickets.

"I'm not convinced England will get past the follow-on target - we didn't bat well in Brisbane, or in England when we were flattered by a 3-0 series win."

With three days of clear weather left in the game and the pitch expected to wear on days four and five, it will take batting way beyond their recent efforts for England to hang on for a draw.

Yet with the deficit still 535 runs and 18 innings having passed since they last passed 400, the prospect of consecutive defeats is a realistic one.

And with the next Test at the Waca in Perth, a ground that England have only won at once in its history, the Ashes could yet be gone with two Tests and Christmas still to come.

If that sounds pessimistic, England had begun the second day hopeful that they could take the remaining five wickets in reasonable time to restrict the home side to no more than 350.

Instead they laboured through a disheartening morning session in which Clarke and Haddin were aggressive, energetic and eventually unbeaten.

In total 116 runs were pillaged as England's bowlers struggled to offer sustained threat on a lifeless pitch, the chances that did come once again spurned to add to the tourists' frustration.

Haddin had been dropped on five and Clarke on 18 on the first day, and the wicketkeeper had another life when Carberry's wayward throw allowed him to survive what should have been a simple run-out.

On 51 he had another when Ben Stokes thought he had him caught behind, only for a retrospective no-ball to bring him back when he was halfway to the pavilion.

But they were brittle straws to clutch at as the two most experienced men in the Australian line-up made hay in the bright south Australian sunshine.

Clarke in particular played with classical grace against the twin spin of Panesar and Swann, using his quick feet and soft hands to defend and caress as well as bludgeon.

When his century came up off 175 balls, decorated with 11 fours, it was his sixth at this ground, taking his average here past 100.

The partnership had reached 200 - the biggest for the sixth wicket at the Adelaide Oval - when Clarke clipped Stokes to Anderson at mid-on to give the 22-year-old all-rounder his first Test wicket.

Haddin continued to attack. After Stokes had Peter Siddle caught behind for two, the number seven went to his own century with a pull for four off the same bowler.

It was almost a surprise when he edged Stuart Broad to Matt Prior after tea, but by then the damage had been done, Swann coming in for particular assault.

Haddin hit five sixes in his innings to equal Adam Gilchrist's Ashes record, and as Harris followed his lead, the team's final total of 12 broke another Ashes mark.

But there was another statistic that will hurt England even more - the cumulative 286 runs that were added by Haddin, Clarke and George Bailey after all three were dropped on the first day.

Given that hour and a half to show they too could profit on this wicket, England instead lost their captain in only the third over.

Johnson's delivery was blisteringly fast - clocked by the speed gun at 94.5 mph - and Cook's footwork was inadequate for the task, his off stump slammed backwards as the three slips and two gullies leapt in celebration.

Carberry (20 not out) and Root (nine not out) then survived several near misses, the left-handed opener fortunate that Rogers' throw missed the stumps with him well short of his ground following a terrible call from his partner, and even more fortunate that Australia failed to review a late Johnson lbw shout that was hitting leg stump.

But with 335 more runs required to avoid the follow-on, England still face a fearful task if they are to rescue something from the wreckage of these first two days.