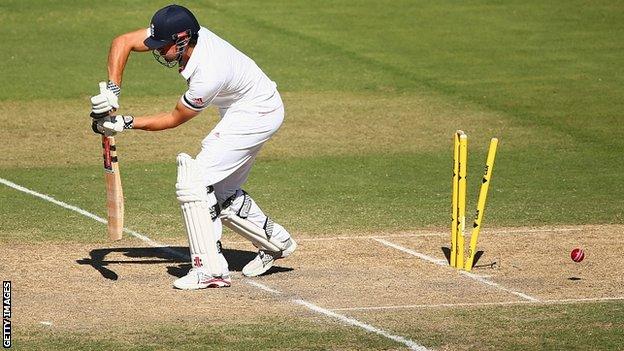 Australia's day. And some.

Tons for Clarke and Haddin. Fifty for Harris. Sixes galore. 570-9.

Bad day for Swann. Not much better for Monty. Stokes the pick of a bad bunch.

A lifeless pitch? Flat as a pancake? Nothing in it for the quick bowlers? Somebody forgot to tell Mitchell Johnson. 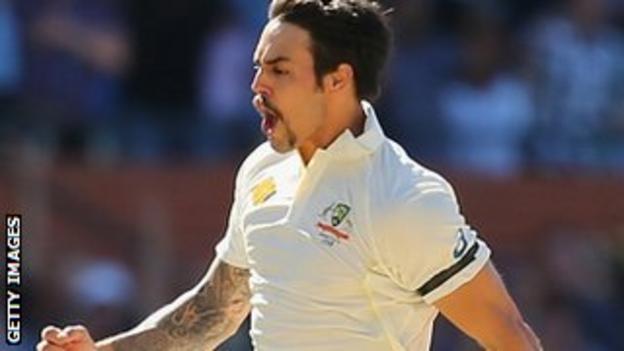 After two days of watching England's seamers look about as threatening as a ballerina in a boxing ring, the Australian left-armer landed a knockout blow to remove touring captain Alastair Cook.

Clocking in at 94.5mph and straightening off the pitch, the ball beat the flat-footed England captain for pace, eluding the edge of his angled bat and thundering into his off stump.

Pint-sized Ashes: A two-minute round-up of the day 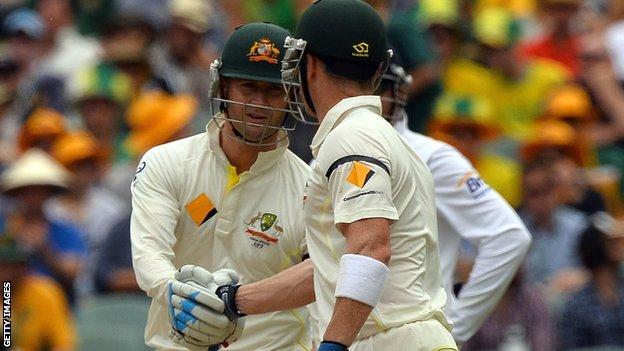 After three dropped catches on day one, costing a combined total of 286 runs, it was another tale of what might have been for England on Friday.

Clarke got a leading edge to his first ball of the day from Monty Panesar, which looped over the covers. He later hit the ball against Ian Bell at short leg and twice narrowly avoided being run out.

Haddin, who also escaped being run out, top-edged James Anderson but the ball dropped short of Panesar at fine leg.

And Ben Stokes thought he had his first Test wicket when he had Haddin caught behind for 51 - but replays showed it was a no-ball and the Australia keeper was reprieved.

At the end of the over Stokes and Haddin engaged in a verbal confrontation and had to be spoken to by umpire Marias Erasmus.

A bad day for England could have been even worse as they were let off the hook from the final two balls of the day. 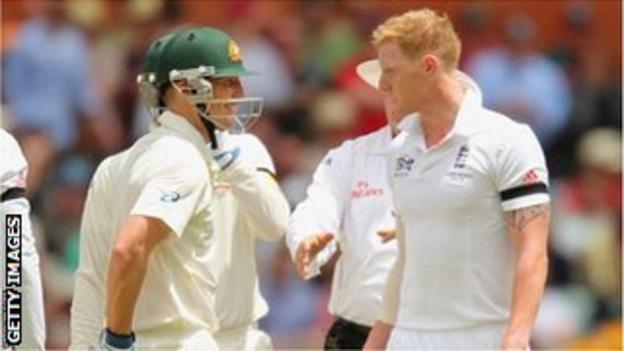 Michael Carberry, called through for a crazy single by Joe Root, escaped being run out when Chris Rogers missed the stumps from cover.

Johnson then rapped Carberry on the pads and had an lbw appeal turned down. Australia opted not to review the decision, only for technology to show he would have been given out.

England all-rounder Ben Stokes: "It has been a tough two days but it's nice to get off the pitch and concentrate on what we've got to do with bat. We need go out there and do what we do. We have a lot of talent in our batting line-up and we know we have the skills to do it.

"My first Test wicket was a very special moment. We have plans as a bowling unit, which is to bowl pretty straight but the pitch wasn't doing much. We created quite a lot of pressure and the wickets came eventually. We go in tomorrow with nine wickets left and hopefully we can pile it on."

Australia vice-captain Brad Haddin: "We can't wear a winners' smile yet. There are still three days in the game, but we've put ourselves in a good position to drive the game where we need to tomorrow. It's up to us to bowl well and capitalise on a good score."

Australia coach Darren Lehmann: "When the captain and vice-captain lead the way, that is pleasing to see. Johnson's delivery to get their skipper was beautiful. Hopefully that can continue.''

Former England captain Geoffrey Boycott: "The most disappointing part of the day is that we never looked as though we could hold them in check for any part of the day. Australia took them apart with consummate ease, none of the bowlers could stem the flow of runs. I know it's a flat pitch, but Michael Clarke is probably the best player of spin in the world, so it was money for old rope for him, Haddin was punishing us at will, and Swann looks nothing like the world-class bowler that's got 250 Test wickets."

Former England captain Michael Vaughan: "England have gone past plans A, B and C and are now down to X, Y and Z. There's a different feel to this England team at the minute. They are going through transition, while Australia are playing very, very well."

Sunday Telegraph cricket correspondent Scyld Berry: The ferocity of Mitchell Johnson's 150-plus kph attack is awe-inspiring. Harris and Siddle are sharp but they are medium pacers by comparison. 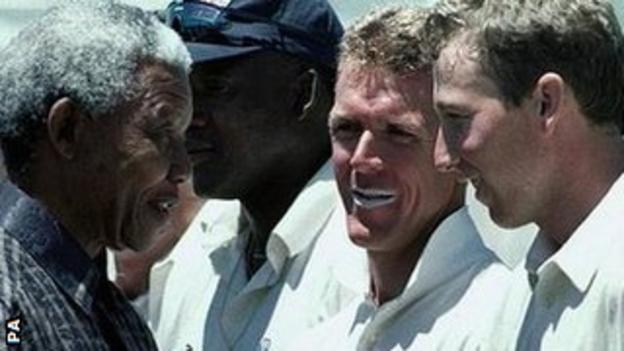 BBC cricket correspondent Jonathan Agnew on Twitter: A sad day with news of Mandela's passing. An unbelievably forgiving man and inspiration to millions. I interviewed him (very badly) in 1995... was the most nervous I've ever been.

Former England all-rounder Paul Collingwood on Twitter: Had the honour of meeting South Africa's greatest icon. We are very privileged to play sport for a living but even more privileged to meet people who changed the world, not just South Africa. Looking forward to our holiday in Cape Town on Saturday. Think Robben Island will be getting a visit.