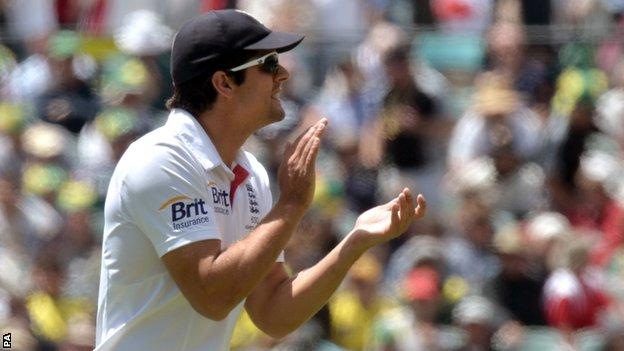 England shaded the opening day of the second Ashes Test in Adelaide, although dropped catches took the gloss off an otherwise excellent performance as Australia reached 273-5 at the close.

I think the tourists got their selection exactly right by picking Monty Panesar on a flat and lifeless pitch that had little in it for the seamers.

England so rarely play two spinners, let alone here in Australia, so it cannot have been an easy decision, but it was the right thing to do to give themselves the best chance of winning the game and getting themselves back on level terms in the series.

Having gone with Panesar and Graeme Swann, it was obviously a blow to lose the toss but the bowlers stuck at it well in difficult conditions.

A strong wind made it particularly tough for the seamers, but they all deserve credit, including young Ben Stokes, who has probably never bowled on a track as flat as this in his life.

But having worked so hard to get Australia to 174-4, England let themselves down with some pretty basic mistakes in the field.

Joe Root's chance to remove Michael Clarke was a difficult one but Panesar really should have clung on to the caught-and-bowled opportunity offered up by George Bailey.

Michael Carberry's howler at backward point to reprieve Brad Haddin at the end was almost inexplicable.

Cut shots off a spin bowler can zip at you a bit, but he should have caught it, especially in these conditions where chances are few and far between.

Despite the disappointing ending, England can draw great encouragement from the way they fought back from a difficult position.

Much of the credit for their revival should go to captain Alastair Cook, who got his players together for a team talk during the drinks break in the afternoon session.

At that point, Australia were in total control on 137-1, but Cook urged his men to keep their spirits up and stay focused on the job and was rewarded with three quick wickets that really shifted the momentum.

It was a good example of proactive captaincy on an excellent day for the England skipper in which he came up with clever plans for each batsman and regularly shuffled his field placings and bowlers.

I think Shane Warne has got it badly wrong with his criticism of Cook as a "negative" and "boring" captain.

It is ridiculous to expect a young guy to come in with little previous captaincy experience and be gung-ho from the start. Instead, Cook has been careful and cautious, but is gradually starting to trust his instincts a bit more and switch things around.

Just as importantly, he is really growing into the job off the field. I see him at practice, in news conferences and around the hotel and it is clear that this is a man who is getting more and more confident in what he does as time goes on.

He and his England side must now ensure that Australia's lower order do not repeat what they achieved in Brisbane when Haddin and Mitchell Johnson dug the hosts out of a first-innings hole with a seventh-wicket partnership of 114.

This is the sort of pitch where you are more likely to force a win through weight of runs on the scoreboard than by relying on the ball to do anything unusual.

If England can keep Australia to around 350 and then put 500 on the board, they will be in a position to go on and win the game.

Listen to Jonathan Agnew and Geoff Boycott's review of the day on the TMS podcast page.